Politicians are responsible for everything, laments Ghulam Hassan Dar, a farmer and cloth merchant, and father of the Pulwama suicide bomber, Adil Ahmad Dar. “They are not doing anything because no harm comes to their families. In the end, we lost lives on both sides,” says Dar, mourning not just his son’s death, but also those of the jawans of the Central Reserve Police Force. He was, of course, referring to all politicians—in India and Pakistan, and, in particular, those in Kashmir.

Kashmir’s millennials, born in a period of hope but growing up in a period of despair, have little regard not just for the Abdullahs and the Muftis, but for the Hurriyat as well. They are a generation in search of leadership, seeking hope in their future. Bringing them back into the state’s and the nation’s political mainstream is the challenge at hand. As former Union home secretary G.K. Pillai put it recently, “Kashmir is not a territorial issue…. It is about bringing the people of Kashmir to our side, making them feel that they have a say in how Kashmir and their lives are governed.” 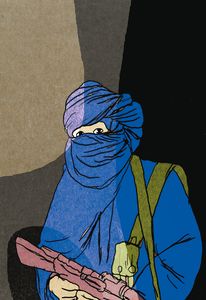 While the Abdullahs, the Mufti family and the Hurriyat may strut around the country and the world, they have lost the respect of their own people, especially the young and the economically backward. Kashmir’s politicians of most hues have become millionaires within their lifetime, while the state’s ordinary folks rue the loss of opportunities for a better life.

The battle in Kashmir is within—between its development and opportunity-seeking youth and a greedy, delegitimised political leadership. On top of this is the mountain of corruption that has created so many vested interests, in India, Pakistan and Kashmir, in favour of the status quo.

The last attempt at breaking the mould was made by former prime minister Manmohan Singh when he convened the Jammu and Kashmir roundtable and initiated a dialogue with Pakistan. The roundtable was the last attempt at bringing together all political voices within the state. It is a different matter that both the Hurriyat and the BJP chose to stay away from the roundtable. But, if ever a genuine solution to Kashmir’s alienation has to be found, it would require the imprimatur of all political stakeholders in the state, and in New Delhi and Islamabad.

Manmohan Singh and Pakistan president Pervez Musharraf came very close to an understanding with their jointly developed formula that Singh summed up at a public meeting in Amritsar, in March 2006: “I have often said that borders cannot be redrawn, but we can work towards making them irrelevant…. People on both sides of the Line of Control (LoC) should be able to move more freely and trade with one another.” He then suggested the creation of “cooperative, consultative mechanisms” that would have the approval of New Delhi and Islamabad, and would facilitate Kashmir’s social and economic development on both sides of the LoC.

No one talks about this formula any longer, but that remains the “final solution”, whenever the leaderships in New Delhi, Islamabad and Kashmir are ready for it. Till then the alienation of the Kashmiri Muslim has to be managed. The fact is that a majority of them still see their future in India, where they come to study and trade, to have fun and find jobs, to buy property and marry. Let no terrorist or bigot disrupt this flow and intermingling of people.