Doles have made the government doleful: Sachidananda Murthy

Five kilograms of rice or wheat may be tiny compared with India’s huge grain stockpile, but it has been proposed that the government discontinue giving this modest quantity of grain to 81 crore families (totalling 4.4 million tonnes) every month. The proposal has provoked pleas to Prime Minister Narendra Modi to continue the stimulus until next summer.

The BJP-ruled Uttar Pradesh, which goes to the polls next summer, has extended its own pro-poor food grain programme till next Holi, while Delhi Chief Minister Arvind Kejriwal has said that his government’s free grain supply scheme will run for another six months. Other states and political parties want the Centre to continue the scheme, which Modi has described as the world’s largest food security programme. States like UP, Kerala and Tamil Nadu have added kitchen essentials like edible oil, salt and sugar to the free grain kits. 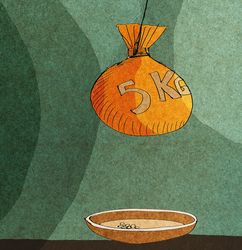 Yet Modi and Finance Minister Nirmala Sitharaman face a dilemma in extending the scheme, which was announced as part of the 020 lakh crore stimulus package during the first Covid lockdown. The scheme was introduced for three months to help poor families uprooted by shutdown restrictions, especially those living in villages and urban slums. It was continued as the Covid threat lingered.

The food ministry now says the economy is recovering and that grain distribution in the open system has stabilised. The ministry records also show that even as politicians heap praise on the scheme, as many as 11 states failed to pick up more than 10 per cent of their allotted quota during several of the past 18 months. Also, the grain did not reach many beneficiaries because of corruption and wastage in the system; migrants who had returned to urban centres were no longer drawing free ration.

As elections are being held in five states next March, the discontinuation of the scheme could have political repercussions. There is intense debate in the ministries of finance, commerce, and food and civil supplies on when to end the various stimulus measures announced by the Centre and the Reserve Bank of India last year.

The RBI’s monetary policy committee recently decided to continue its “accommodative” stance of maintaining lower interest rates, moratoriums on payment of interests, higher subventions to banks and other lenders, and concessions for industries and exporters. There are fears that the government’s stimulus spending may not be sustainable and that the borrowing would shoot up.

RBI Governor Shaktikanta Das had defended the accommodative approach as pragmatic, because economic growth was yet to take firm roots and there were worries about supply bottlenecks, fuel price spike and “several uncertainties” in the global economy. But a member of the monetary policy committee warned that the continuation of stimulus in a fast-recovering economy could push inflation higher.

Experts also point out that the Rs30,000 crore stimulus package that the Manmohan Singh government introduced in December 2008 was continued for a long time, resulting in rapid widening of the fiscal deficit. The 2008 package also allowed banks to be imprudent in lending, which saddled the first Modi government with a banking crisis.

While logic dictates that the Covid-era stimulus needs to end, there are compelling political reasons to cater to the wants of a population battered by health and financial emergencies. The call that Modi needs to make is a tough one, especially since most of the stimulus measures are labelled as prime ministerial programmes.