Andhra Pradesh Panchayat Raj Minister P. Ramachandra Reddy has escaped “house arrest” thanks to an urgent intervention by the High Court. But, the big-talking minister has been told not to address the media till the panchayat elections are over on February 21. State Election Commissioner N. Ramesh Kumar, who had directed the police to confine Reddy to his home till the elections were over, is fuming.

The ruling YSR Congress Party calls Kumar a puppet of the Telugu Desam Party. Kumar has had major run-ins with the government after Y.S. Jagan Mohan Reddy became chief minister in 2019. Kumar charged Ramachandra Reddy, who is the nodal minister for the elections, with threatening district collectors and returning officers. The minister had accused Kumar of favouring the TDP and said he was preparing a list of bureaucrats to be punished after the elections. The skirmish between the government and the autonomous commissioner has enlivened politics as the two political parties vie to control the state’s 22 district panchayats and 21,807 panchayats. 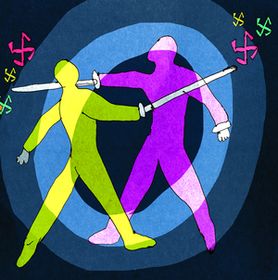 A close aide of the chief minister had lamented that the ruling party lacked the two-thirds strength in the legislative council to impeach and remove Kumar. Hence, the government had sought to conduct the elections in the summer, as Kumar is due to retire on March 31. The government said that disaster response norms were in place because of Covid-19. But, Kumar responded that states like Kerala and Karnataka and the Union territory of Jammu and Kashmir had held local body elections during the pandemic. He has accused the government of trying to curb his powers as a constitutional authority because he did not dance to its tunes.

The skirmish in Andhra Pradesh is not the first of its kind after the Constitution was amended in 1992 to give protection to rural and urban local bodies. In 2008, the Maharashtra state election commissioner, Nand Lal, was sent to prison for two days because he refused to appear before the privileges committee of the legislative assembly, insisting he enjoyed the same immunity of a High Court judge. In 2013, in West Bengal, newly elected chief minister Mamata Banerjee had railed against commissioner Mira Pande. One of her ministers vehemently criticised the commissioner. Often, opposition parties, too, make serious allegations against commissioners who are the appointees of the ruling party.

Kumar reminds many people of T.N. Seshan, who as chief election commissioner had ordered the removal of a governor who had gone to his son’s electoral constituency. Jagan Mohan Reddy will install his own election commissioner on April 1. But, by then, Kumar would have completed the election process.