There was much amusement in 2012 when the Pakistan supreme court spent considerable time on whether the government has the right to fix the price of a samosa at Rs 6. After lengthy arguments by bakers’ association and the government, the lordships decided that samosa could not be subject to a fixed price, as the price of its ingredients, including meat, fluctuated widely.

If the Pakistan supreme court allowed cases to pile up while examining the stuffing of samosas, the Indian Supreme Court may now be asked to define the meaning of ‘foodstuff’. This word, which is used in the Constitution, would be at the heart of the dispute between the Centre and states on agricultural marketing reforms.

These reform bills were declared passed amidst din in Parliament, without allowing for voting. The resentment has spilled into the streets even as the prime minister has described the reforms as historic benefit for the farmers.

There was discord in the ruling NDA, and one of its founders, Akali Dal, walked out of it, as violence erupted in Punjab and other states. The Congress said the reforms were a prelude to dismantling the minimum support price for foodgrains, and that the benefit would now go to big business groups, pushing farmers into debt. 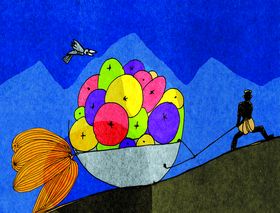 Congress president Sonia Gandhi asked her party’s chief ministers in Punjab, Rajasthan, Chhattisgarh and Puducherry to pass their own state-specific bills to nullify the effect of the new Central law. The Centre’s lawyers say that even if they pass the bills, these cannot become law without the assent of President Ram Nath Kovind, who has to act on the advice of the Central government. But, Sonia’s move is to gain political mileage by saying that the protectionist proposals of states are blocked by an apathetic Central government.

At the heart of the dispute is Entry 33 in the Concurrent List of the Constitution. Unlike the Union List and the State List, which give specific law-making powers to only the Union government or state governments, the Concurrent List gives equal riding rights, though there are provisions when a Central law will prevail over a state law on the same subject. Though agriculture is Entry 14 in the State List, the founding fathers brought confusion with Entry 33 of the Concurrent List, which says both governments control “trade and commerce in, and the production, supply and distribution of...., foodstuff, including edible oils and seeds.”

Agriculture, broadly, includes food and non-food (for example, cotton) crops. States have assumed the right over it ever since the Constitution came into force in 1950. All states have enacted agricultural produce marketing laws.

Now, the Centre has asserted its own right to bring changes not only in trade in but also in production, supply and distribution of ‘foodstuff’. The dictionary defines ‘foodstuff’ as a substance suitable for consumption as food or to make food. Thus, ‘foodstuff’ could mean agricultural products, which are consumed, or are processed to be made into food.

Interestingly, neither the food minister (Ram Vilas Paswan) nor the food processing minister (Harsimrat Kaur, who resigned in protest) moved the new laws. They were moved by Narendra Singh Tomar, the agriculture minister.

While the battles would be fought in Parliament and in courts, the real test for the reforms would be in the marketplace. Narendra Modi is sure that the freeing of farmers from the control of the agricultural produce marketing committees would give them the freedom to sell ‘foodstuff’ anywhere in the country for advantageous prices.

In the government’s eyes, it is an eternal rainbow for the farmers, while the opponents fear a dark age without guaranteed prices for farmers. The fickle economic weather of the country alone will determine what the skies hold for the farmers.