Jail, bail and the frail

While high courts granted bail to undertrials who faced simple charges, opposition parties and civil liberties organisations demanded similar concessions to high-profile political prisoners, including those held under the Unlawful Activities Prevention Act or in preventive detention in states like Jammu and Kashmir. But the Central government and several state governments are against releasing them, even the elderly and the ill who are more vulnerable to the virus.

There is a high-voltage campaign in Maharashtra for bail to naxal activists and sympathisers who were arrested for supporting the Elgar Parishad rally near Pune. But, the National Investigation Agency has stoutly opposed their bail applications moved on medical grounds.

The octogenarian poet Varavara Rao has become a symbol of the political prisoners. His family says his life is in danger as he is very ill, but the Central government is firm that people facing serious charges that can attract seven years imprisonment should not get bail.

The laws enacted in India do not recognise anyone as a “political prisoner”. This phrase was last accepted by the Indian state when lakhs of people were imprisoned under the Maintenance of Internal Security Act during the Emergency. 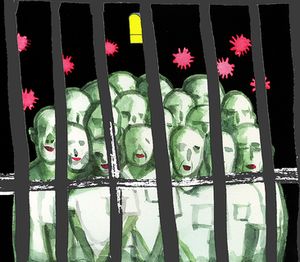 Seven of the leaders who had opposed the Emergency—Morarji Desai, Charan Singh, Chandrashekhar, A.B. Vajpayee, H.D. Deve Gowda, I.K. Gujral and Narendra Modi—became prime ministers, but the tough laws against political activities deemed as unlawful have remained in the statute book. In fact, violent agitations in Punjab, the northeast and Kashmir provoked enactment of harsher laws like the Terrorist and Disruptive Activities (Prevention) Act and the Prevention of Terrorism Act.

The UAPA, enacted in 1967, was strengthened last year. Its critics say this law has been invoked against political dissenters who oppose the class or caste system or state oppression. But, governments argue that these dissenters and intellectuals are promoting violence and encouraging Maoists and separatists who are trying to break up the country. Pro-government voices have described many academics as “urban naxals”. One of them, the Delhi University professor G.N. Saibaba, is a lifer in wheelchair.

The police say incarceration of these intellectuals breaks the Maoists’ command and control chain, and so Rao and his dozen friends should not get bail.

Home ministries note that high courts’ bail review committees have not released non-political undertrials charged with murder, rioting and money laundering. They insist that even political workers who take part in public demonstrations should be slapped with serious charges like attempt to murder, rioting, destruction of public property or obstruction of public offices from functioning.

But, when the party of these “offenders” comes to power, the charges are waived routinely as vindictive actions of the previous government. Rao and his fellow prisoners, however, have little chance of getting bail unless the higher judiciary intervenes.