But for digital networking, the stock market, operating from a very crowded street in South Mumbai, would have been closed for business as part of the national lockdown. But stockbroking is no more a brick-and-mortar activity. If stockbrokers were still turning up at Zaveri Bazaar, it was out of old habit and also because their offices were in the neighbourhood. Now, the sale and purchase happen in globally linked networks, administered, also remotely, by the Securities and Exchange Board of India.

During the lockdown and the weeks preceding it, the markets have been hammered by international and domestic forces, with the Sensex sliding down to where it was when Narendra Modi took office, wiping out the massive gains made during his 72-month rule. Along with equity transactions, the markets dealing with commodities, precious metals and currencies, too, are open but fluctuating. While headlines speak of investors losing huge amounts because of plummeting prices, the sell-off by institutional and retail investors is causing a change in the ownership mosaic of several listed companies.

Several promoter groups with deep pockets have been buying their own company’s shares as the prices have come down because of global reasons and not because of changes in the fundamentals of the company. There are reports that blue-chip groups like the Tatas, Aditya Birla and Reliance have made use of the slump to shore up their portfolios. Similarly, big overseas investor groups that have bet big on India are also buying shares of established as well as greenfield companies, both for a say in the management and to hold enough stocks to sell when the boom period returns. 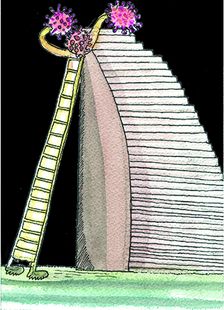 But Congress leader Rahul Gandhi has raised a genuine concern, and his admirers insist it is as prescient as his warning in early February about the need for a master strategy to prevent the spread of Covid-19. After it became clear that the People’s Bank of China had been acquiring shares in HDFC (it now holds over one per cent stake in the country’s largest private bank), Gandhi said that the economic slowdown had weakened companies in India and he wanted the government to prevent “foreign interests” from taking control of any company “at this time of national crisis”.

It is easier said than done though, as all governments from 1991 onwards have allowed both foreign direct investment and share market access to foreign players, specifying sectors and shareholding limits in areas ranging from banking to automobiles to pharmaceuticals. Indian promoters of several successful companies, from airports to white goods, have sold their shares to foreign interests. Any sudden withdrawal of these rules could have a shock effect on the economy. The government, however, has prevented any Pakistani investments for national security reasons. The security establishment is also wary about Chinese investments.

Ownership regulations for the banking sector have been controversial for long. As the Reserve Bank of India wanted promoters to slash their holdings to 15 per cent within 15 years of getting a banking licence, many promoters shed their equities for profits. Only Kotak fought a court battle to hold on to its larger shares. There is a feeling that Yes Bank promoters indulged in many shenanigans as their equity base was low and there was no “ownership stake”.

Normally, finance ministers do not intervene when markets fall or rise. Manmohan Singh’s famous statement that he does not lose sleep over the markets has been repeated by some of his successors. It will be interesting to see how Nirmala Sitharaman will react to Rahul Gandhi’s concerns.