No truck with the virus

When pandemics come, truckers across the world are in focus. They are essential for service, but they are also vulnerable. They are constantly on the move through different climate, hygiene and lifestyle zones, as they keep moving vital goods and live for long periods away from home. Their relevance came to the fore yet again when the state and city borders were clogged with trucks, their loads and hapless crews. Though the country has seen multi-lane highways mushroom, little attention has been paid to the welfare of drivers and their assistants, with the national highways authority more fascinated by electronic management of the system.

The initial lockdown order had only allowed movement of essential commodities, but the police enforcing the lockdown had not got clear instructions. While trucks with “nonessential” goods like raw materials and machinery parked where they were, even trucks carrying food and medical goods came under extra scrutiny. As the home ministry kept tightening the lockdown orders, there was more confusion.

Finally, it took the inter-ministerial management skills of Defence Minister Rajnath Singh (among the five cabinet members with chief ministerial experience, including Narendra Modi) to sort out the issue. As head of the ministerial group to implement the response to the crisis, Singh agreed with Industries Minister Piyush Goyal that movement of goods was essential to keep the economy ticking. The group also took some of the load off the prime minister as all ministers were looking to Modi for direction. The earlier group under Health Minister Harsh Vardhan, which managed the screening and patient containment policies, was subsumed into the larger group, which drew in ministers dealing with rural economy like Narendra Singh Tomar (agriculture and rural development), Ram Vilas Paswan (food and civil supplies) and Gajendra Singh Shekhawat (water resources). As number two in the cabinet, Singh carried the clout and persuasive powers to ensure implementation of decisions. 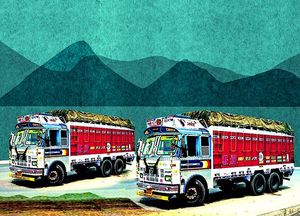 The group discussed the lack of flow of goods in and out of rural areas, where small and medium-sized vehicles play a big role. Farmers across the country complained that their produce—from perishables like flowers and milk to food grains—was not being picked. The government ordered that all goods transport vehicles be allowed to ply, but the lockdown is still affecting their movement.

Meanwhile, activists have flagged health and safety concerns of the truckers. The government is now working on supplying safety gear to truckers and also testing them regularly.

Two decades ago, the health ministry, under its mission to combat the spread of HIV, had identified truckers as a vulnerable group and had sensitised them regarding precautions. It was a long and sustained campaign. Now, the new pandemic has not given the government the luxury of time and the medical force is already burdened with an uneven fight to contain the virus. The road transport and industries ministries, with their counterparts in the states and Union territories, will have to take responsibility to keep the wheels of the economy moving by ensuring a proper work and rest schedule for the eight-million-strong transport family—drivers, helpers, loaders and agents spread across the country—so that they move only goods and not the virus.