It is a tiny drop in an ocean-sized investment made by funds managed under social security schemes of the Union government. Yet the Reserve Bank of India’s decision to wipe out the Additional Tier-1 (AT1) bonds issued by the crisis-ridden Yes Bank has caused tremors in the Union labour ministry, and among Central trade unions. The total write off is Rs9,000 crore. Of this, the amount invested by five provident and pension funds of four public sector companies, and one large public sector bank, is just Rs35 crore. One of the public sector funds is of State Bank of India employees and, ironically, it is the SBI that is leading the bailout of Yes Bank. But, in the process, its employees’ fund will lose a few crores.

As Central provident funds have invested over Rs2 lakh crore in mutual funds and private sector bonds, the loss of Rs35 crore should not even cause the tiniest flicker. After all, as every honey-worded advertisement says, these deposits are “subject to market risks”. The Employees’ Provident Fund, National Pension System, Coal Mines Provident Fund and Employees State Insurance Corporation are among the largest public funds, which have a combined corpus of Rs15 lakh crore. Until 2015, the Central government had mandated that the corpus be parked in government-owned banks and securities. But since economic reforms opened up the financial sector for domestic and foreign private players to set up banks and insurance companies, there had been a strong demand for the prohibition to be relaxed. But there was strong resistance from the trade unions of all parties. The left parties had supported the United Front and UPA governments, while the RSS affiliate Bharatiya Mazdoor Sangh had a significant voice in the Atal Bihari Vajpayee government. 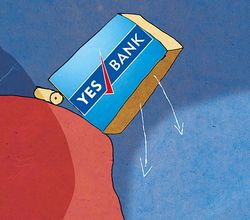 But pro-reformers argued that the government should not discriminate, especially as there was pressure for provident fund interest rates to be higher than the interest paid out for fixed deposits by banks and for government bonds. During the boom years of the economy, it was argued that private mutual funds offered a better yield. The finance ministry had a group of economists who argued that the door could be slightly opened for private banks and mutual funds, while the bulk of the deposits could be vested with government banks and schemes. They pointed out that, world over, workers’ pension funds had invested in markets successfully.

But the trade unions that had seats on the boards of social security funds were adamant about not investing in markets, even when governments refused to support higher interest rates in provident funds. The unions argued that the provident, health and pension monies invested by workers during their careers cannot be used for “gambling” in high-risk markets.

But the election of a single party-majority government in 2014 strengthened the reform voices. That year, Prime Minister Narendra Modi and Finance Minister Arun Jaitley were convinced that there was a need to simplify the hard rules if India had to move up from its abysmal position in the World Bank’s index of ease of doing business. Jaitley permitted the funds to invest up to 5 per cent outside government schemes. As there was no negative effect, the limit was first raised to 10 per cent and now stands at 15 per cent.

The finance ministry, which has, with the help of the RBI, handled the crash of several public and private sector banks, is confident that the door should remain open. It would make one more assessment of the financial sector strengths and risks before reacting to the industry demand for raising permissible investment to at least 30 per cent. The unions would put up their objections, citing the fear of contagion among the private players.