Where are we heading!”tweeted West Bengal Governor Jagdeep Dhankhar as he flounders in a sea of apathy and resistance in a state where he and the ruling Trinamool Congress are at loggerheads. A combative Mamata Banerjee has restricted his powers to the Raj Bhavan compound, as she thinks he is an agent of the Narendra Modi government out to help the BJP in its ‘Oust Mamata’ campaign. The highly successful lawyer from Rajasthan has been denied entry to the state assembly once and also to some of the prestigious educational institutions.

Now he finds the vice chancellors of the state’s 20 universities cocking a snook at him, even though he is the chancellor of these universities. Upset that his “right to preside”over the convocation of the Cooch Behar Panchanan Barma University was not honoured as vice chancellor Debkumar Mukopadhyay did not invite him, Dhankhar then served a show cause notice to Mukopadhyay, asking why he should not be removed from his post. Even though Dhankhar offered him a personal hearing, Mukopadhyay turned to the association of vice chancellors that declared that the notice was infructuous as it was not routed through the education department. Mamata had amended the rules to say that all communication between the chancellor and the universities had to go through the education department, which she controls. Subsequently, the chief minister met the governor, which the latter described as “satisfactory”. 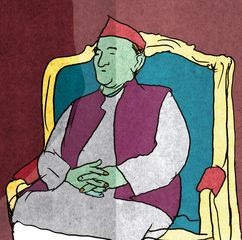 With 13 of the 28 states ruled by parties not aligned to the BJP. The governor-chief minister relationship varies from state to state, depending on the tempers of the two individuals. Several states have tried to circumvent the control of the governor over state universities (there are 409 such institutions in the country). Kerala also had two BJP-nominated governors—P. Sathasivam and now Arif Mohammad Khan—directly questioning vice chancellors, thereby annoying the state government. Such differences have been there since the 1960s when there was increasing divergence in political rule at the Centre and states. When prime minister P.V. Narasimha Rao appointed Andhra strongman M. Chenna Reddy as governor of Tamil Nadu (which was ruled by an initially supportive chief minister, J. Jayalalithaa), Reddy kept a cane on his table. He would joke that if the job of vice chancellors was to discipline students, he was ever ready with his cane to discipline errant vice chancellors! The differences with the governor was one of the reasons why Jayalalithaa withdrew support to the Congress government. Though Rao survived a trial of strength, a frustrated Reddy soon began to carp about the prime minister who had moved him to Madras (as Chennai was known then).

There has, however, been less friction in the functioning of 50 Central universities where the visitor (who also appoints vice chancellors) is either the president or vice president of India. The prime minister is the acharya of Visva-Bharati, the Central university in West Bengal. The collision has happened when parties opposed to each other are at the Centre and the states. But where there is political similarity, there have been allegations of collusion to push the dirt under the carpets.

The national law universities, which were set up with the initiative of the Supreme Court, have the chief justice of India as the visitor. When the first national law university was being set up, there was a suggestion that the tradition of making the president as the visitor of a Central university should be incorporated. But the Supreme Court judges felt that the government of the day could intervene as the president is bound by the advice of the council of ministers, and it was better to ensure autonomy by giving the top job to a judge. Perhaps, all universities need such robust systems, as otherwise everyone will know where they are heading—downhill!