At a time when Bangladesh is threatening to permanently overtake India in apparel exports, Finance Minister Nirmala Sitharaman has paid strong attention to the sector which employs over two crore people. Sitharaman announced a national technical textile mission in her budget and promised 01,480 crore for the new mission-based approach. Technical textiles include a wide range of medical and mining dresses as well as textiles for non-human usage.

As Sitharaman pointed out, the country imports a huge quantity of technical textiles to meet the stringent standards in healthcare, mining and other industries. With the assistance of state governments, the mission aims to promote manufacturing using different kinds of materials like cotton, wool, jute and plastic. The idea is to help existing manufacturers to have multi-fold expansion or even to set up new industries. The budget has also announced tax reliefs and procedural simplification for manufacturers in categories of cotton, silk and polyester. This would help India to maintain the second position after China in overall textile exports. (The European Union has more exports than India, but among individual countries, India is second). 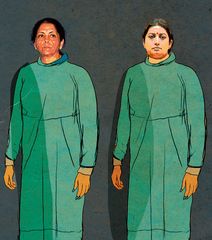 Textiles Minister Smriti Irani has been prodding for stronger relief to face the competition from across the eastern border. The coronavirus epidemic may affect the performance of China, though no estimates are available on cancellation or delay of garment import orders placed by the United States and European countries with the Asian major, yet. The Bangladesh government is projecting apparel exports valued at $38 billion with a growth rate of 7 per cent in 2019-2020, while Indian exports projection in this category is $35 billion with a growth of little over 1 per cent.

Apparels account for more than 80 per cent of the total exports of Bangladesh, whereas it forms a smaller portion of India’s textile exports. When India started competing in the 1990s with southeast Asian countries for exporting apparels, prime minister P.V. Narasimha Rao said traditional trade like tailoring had given new hope to millions of Indians, especially women.

The small textile department in the industries department grew into a ministry, as commerce ministers P. Chidambaram and P.J. Kurien lobbied hard for elimination of country-wise limits put by the United States on garment imports. Once the limitations were removed, textiles from little known places like Tiruppur and Ludhiana, and from big cities like Bengaluru and Ahmedabad crowded the ports. For Bengaluru, after software, apparels became the second largest export item. The World Trade Organization agreements further boosted Indian exports.

But shifting American policies, combined with rising costs of production in India, gave other countries more space in the global marketplace. When the United States said it would give preferential treatment for countries affected by external and civil wars as well as refugee influx, even some Indian exporters shifted their factories to special-category countries like Jordan.

Bangladesh has benefitted in recent years because of its humane policy towards providing shelter to the Rohingya refugees from Myanmar.

The technical textile mission’s first objective is to ensure self sufficiency in special kind of textiles across the country and to eliminate the imports, as it is a tough global market for exports—dominated again by the Chinese. Both Sitharaman and Irani are ambassadors of the rainbow range of sarees, and now they have joined hands to promote other kind of textiles.