Home to be bulldozed?

A favourite phrase of Prime Minister Narendra Modi in governmental meetings of ministers and senior officials is to “eliminate silos in governance”. The prime minister has been emphasising the need for ministries to work across compartments.

In December, Modi’s bulldozer brought down silos in two of the biggest manpower-centric ministries—defence and railways.

In the defence ministry, the office of the chief of defence staff was created. The CDS took lot of powers from the civilian bureaucracy in the ministry, and got charges of cyber and space commands. Expectedly, General Bipin Rawat was made the chief with extensive financial powers, though purchase of capital items like tanks, aircraft and ships remained with the defence secretary. While the need for a CDS had been under discussion since the Kargil Review Committee recommended it in the early 2000s, Modi had committed to appoint one in his Independence Day address after returning to power. 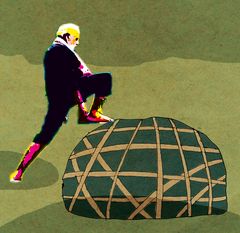 Changes in the structure of railways came as a shocker to senior officials in the railways. At one stroke, the government abolished eight specialised services and brought in a new railway management service, and trimmed the all powerful railway board. The cabinet also said outsiders could become railway board chairman and members, thus opening the doors for the ever expanding all-India services like the Indian Administrative Service and Indian Revenue Service, which had no admittance in the railways till now. The railway officials remain sceptical and wonder whether there is a hidden blueprint to privatise the country’s largest public enterprise.

However, 2020 may see more attacks on silos. Another big ministry which is ripe for reforms is the home ministry, with departments dealing with unconnected subjects like internal security, promotion of Hindi as official language, administration of Padma awards, Centre-state relations and pension for freedom fighters. There is already a report of the expert committee headed by Ajay Shah to reorganise the ministry. The proposal is to ensure that the home minister and his team focus strongly on issues of internal security, border management (including airports and immigration), citizenship and Centre-state relations. While the department of pensions can take care of freedom fighters, the department of personnel or culture would be better equipped to promote Hindi as well as give Padma awards.

Reform in the home ministry could see the merger of at least six of the seven paramilitary forces, whose top leadership is drawn from the Indian Police Service. At present, four different forces—Border Security Force, Indo-Tibetan Border Police, Assam Rifles and Sashastra Seema Bal—deal with different borders. The Central Industrial Security Force deals with security of nuclear plants, large industrial projects, government offices and civilian airports. The Central Reserve Police Force is another behemoth used for internal security operations from northeast to Maoist areas. The thought is to combine these institutions under a police commander and then make theatre commands, dealing with different locations and tasks like desert, jungle, plains and mountains.

Earlier, Modi had restructured the departments dealing with agriculture and water resources, but change is happening at a slow pace in the work culture of these ministries. Like home, another gargantuan ministry awaiting demolition of silos is human resources, which has separate departments for different levels of education. It would be interesting to see how Modi would push the reforms in these big ministries, especially, in home affairs headed by party and government powerhouse Amit Shah.