Sharad Pawar had attributed his high energy levels during the Maharashtra assembly campaign to the defection of many of his Nationalist Congress Party colleagues to the BJP. With the 79-year-old political warrior inspiring the younger generation of the party, the NCP fared better than its partner Congress. Pawar persuaded the Congress to join hands with the Shiv Sena and adeptly handled the brief desertion by his nephew Ajit Pawar. With the Maharashtra government up and running, the NCP is now mulling a reverse Operation Lotus. This is the exact opposite of the Operation Lotus launched by the then chief minister Devendra Fadnavis in the summer of 2019 to woo heavyweights of the NCP and the Congress. The defectors, who are feeling lost in the BJP, now want to return and enjoy the goodies at the table of power.

Operation Lotus was first launched by Karnataka Chief Minister B.S. Yediyurappa in 2008 to shore up his minority government. He got Congress and JD(S) MLAs to resign and contest on the lotus symbol. Eleven years later, Yediyurappa launched Operation Lotus once again. He toppled the H.D. Kumaraswamy-led coalition government by getting 17 MLAs to resign. Twelve of those defectors managed to win the byelections on the lotus symbol, cementing Yediyurappa’s hold on power. 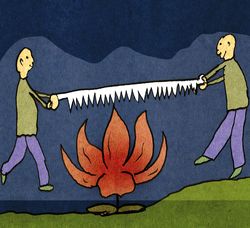 Pawar wants to do a reverse Operation Lotus for two reasons. If he can forgive his nephew for joining hands with the BJP, he should be able to forgive all those who committed the same mistake. Second, such an operation will weaken the BJP’s capacity for mischief in Mumbai.

The Maharashtra Congress is also under pressure to lure back defectors who won on BJP tickets, although Rahul Gandhi is against bringing back unreliable leaders. But party members cite the threat from Fadnavis, who enjoys strong support from Narendra Modi and Amit Shah. They both believe that the BJP’s mandate was stolen by the three partners in the Uddhav Thackeray government, just like it happened in Karnataka. However, BJP chief ministers who lost in straight contests are being forced to cool their heels, as the high command feels that they did not convert the Modi factor into victory. Thus Shivraj Singh Chouhan, Raman Singh and Vasundhara Raje have been given the grand title of national vice president, but not any actual responsibility. Now Raghubar Das of Jharkhand is also being sidelined, as he lost the state comprehensively to the grand alliance led by the Jharkhand Mukti Morcha.

Some BJP leaders in Maharashtra, however, feel that the party’s best bet is to create a rift between the Shiv Sena and its partners, as they are even less compatible than the Congress and the JD(S) used to be in Karnataka. There is suggestion from the anti-Fadnavis camp that the party should nominate a new leader who is acceptable to both the BJP ranks and the Shiv Sena. Supporters of Union Minister Nitin Gadkari say he is the best bet because of his seniority, his acceptance among all factions and his cordial relations with the Shiv Sena. But Gadkari believes that this is not the right time to get involved in state politics as the stakes are not so high. He knows that Modi and Shah are confident that the mandate “stolen” by the Congress in cahoots with the Shiv Sena and the NCP will be restored, as the Thackeray government will not be able to survive its own internal contradictions. It will be interesting to see how the BJP handles a reverse Operation Lotus, if and when it is launched by the NCP or the Congress or by both.