When there are differences between the Union finance ministry and the Reserve Bank of India, it is said that Delhi and Mumbai, where the two are headquartered, do not speak to each other. But now there are doubts whether parts of the Union government based in Delhi speak to each other. The aggressive comments of Home Minister Amit Shah while piloting the citizenship amendment law in Parliament had upset key neighbouring countries whom the Narendra Modi government has been cultivating. Shah was severe while saying that non-Muslim minorities had faced religious discrimination in Afghanistan, Bangladesh and Pakistan, leading to protests from the first two, which are on the government’s friendly list. The external affairs ministry scrambled to assure Dhaka and Kabul that the reference was more to previous governments in these two countries, which had practised extreme religious intolerance. Whether the feathers remain ruffled or not will be known over time, as the governments of Prime Minister Sheikh Hasina in Bangladesh and President Ashraf Ghani in Afghanistan are attacked by their opponents for being too close to New Delhi. 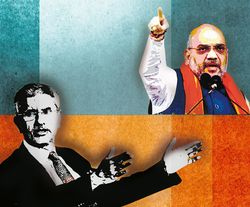 There were suggestions that the home and external affairs ministry did not have a conversation on the details of Shah’s defence of the citizenship bill. In his interventions in Parliament, Shah had elaborated on the constitutional and legal points, based on strong briefs from his own ministry and from the law ministry. He also took the traditional RSS-BJP line to attack the Congress and the governments of the three countries, especially as Bangladesh was East Pakistan from 1947 to 1971, till the India Army liberated it.

External Affairs Minister S. Jaishankar, a career diplomat who retired as foreign secretary, has advocated a more muscular policy towards critics of India. He was in the cabinet when the issue was discussed and was present in Parliament during the discussions. He was in Washington after the protests erupted over the Citizenship Amendment Act; he refused to attend a meeting with a Democrat-dominated committee of the House of Representatives as Pramila Jayapal—a congresswoman who had introduced a congressional resolution urging India to lift restrictions on communications in Jammu and Kashmir—was invited to the meeting. The minister took objection as Jayapal was not a member of the committee and her name was not in the list of participants given to the Indian embassy. The minister, after consulting the prime minister, decided to cancel the meeting, as he did not mind ruffling feathers. Similarly, the ministry has been using strong language to counter criticism from countries such as Malaysia, even though it is an important economic partner and a key member of the Association of Southeast Asian Nations (ASEAN).

But, the ministry has taken steps to repair relations that have been frayed due to the strong opinions of the security establishment. Jaishankar visited Canada to pick up the twisted threads of the relationship with the Justin Trudeau government, which has been accused by Indian intelligence agencies of being supportive of the Khalistan movement. Senior officials say there is always a balancing act, and recall that there were long, chilly spells with Canada after the nuclear tests by India in 1974 and then again in 1998; A.B. Vajpayee’s external affairs minister, Yashwant Sinha, had initiated the thawing process. In the wake of international concerns about the Citizenship Amendment Act and the National Register of Citizens, Jaishankar would have a lot of ‘shuttle diplomacy’ to do in the coming months.