UNLIKE SOME of his predecessors, Narendra Modi takes extreme interest in security aspects, especially policing. As a leader who likes to interact a lot with bureaucrats, he has found time every year to meet with the heads of security and intelligence agencies as well as state police chiefs. Hence, he spent a lot of time at the 54th annual police conference in Pune earlier this month. The conference is convened by the director of the Intelligence Bureau, who is considered the dean of police forces. It is also where officers representing states ruled by parties with political views diametrically opposite to those of the prime minister’s party talk about what is happening and what needs to be done.

At the conference, in which the home minister participates, participants pitch for more funds for modernisation activities like new weapons, technology and specialised wings. National Security Adviser Ajit Doval, who used to convene the conferences when he was IB director, is another key player at the conference. 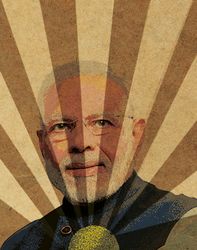 Modi spends many hours listening to the police honchos and the knowledge update is not just about listed items on the agenda, but on activities of criminal gangs, terrorist groups, drug cartels and, sometimes, snippets of political and governance value. But DGPs representing opposition states are careful, mostly, as they do not want to annoy their bosses back home. Interestingly, the prime minister has not felt it necessary to call conferences of all chief ministers to discuss security or developmental issues, which used to be the norm when coalition prime ministers ruled the country. Modi, as Gujarat chief minister, had been unhappy with the format of the conferences, where the prime minister, the home minister and chief ministers made speeches and there was less time allotted for discussions.

But as the economy has slowed down amid concerns of stagflation raised by the opposition, led by former prime minister Manmohan Singh, it may be the right time for the prime minister to go for brainstorming with his own ministers, political parties and economists, especially as the budget would be presented in early February.

While the cabinet and the committee on economic affairs meet every week to discuss specific points, there is need for ministers to pitch in on their sectoral needs. The slowdown has affected key areas like power, textiles, agriculture, coal, mining, real estate, exports and telecom.

There are also several BJP MPs who feel they are not getting the chance to freely interact with the prime minister on urgent issues, as the interaction mainly happens in the weekly one-hour meeting held when Parliament is in session. The BJP has regular meetings of its state chief ministers, but the interaction with the party president and office bearers concentrates more on political and organisational issues, than on the economic policies of the party governments.

Along with the BJP’s political agenda of 2020, which includes elections in Delhi and Bihar, and getting back power in Maharashtra, there are non-political challenges in the new year. Modi and his foreign policy team have to focus on innovative strategies to deal with a turbulent neighbourhood. The trade issues with China have become complicated, and as the government blamed earlier Bangladesh governments for genocide and minority persecution while pushing through amendments to the citizenship law, the Sheikh Hasina government is under domestic pressure to be firm with New Delhi. The prime minister’s cup of priorities is always full, but now it is overflowing.