Scholar and communist E.M.S. Namboodiripad would read anything and everything that he could get his hands on. A memoir recalls him reading even commercial handbills, saying what is written should be read if it comes into one’s hands. Andhra Pradesh Chief Minister Y.S. Jagan Mohan Reddy has no reputation for scholarship nor is he a communist. But he seems to recall everything he had read during his statewide padyatra as opposition leader last year. Now, he is remembering everything given in writing by people who met him, and the oral interactions his aides had recorded on paper. He is also implementing a wide range of suggestions, thereby deeply upsetting the orderly flow of governance.

Jagan, as he is popularly called to distinguish him from his father and former chief minister Y.S. Rajasekhara Reddy, burns with single-minded ambition to change the state. He is also changing everything done by his predecessor and bête noire N. Chandrababu Naidu of the Telugu Desam Party. 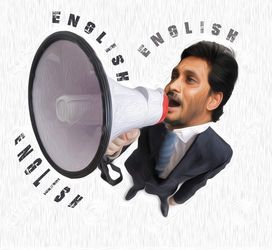 The state is agog about Jagan’s decision to convert every government school, including those run by panchayats, from Telugu- to English-medium. He says this was the aspiration of the poor he had heard during his yatra. They had told him that only English provided jobs and equity in an unfair world. Jagan also says that, due to the insistence on mother tongue as medium of instruction, the state’s illiteracy level was 33 per cent, above the national average of 27 per cent.

The decision, however, goes against the National Education Policy and the new draft suggested by the K. Kasturirangan Committee, which says the medium of instruction should be the mother tongue “preferably till grade eighth”. Several states have been more aggressive on promoting the local language, though the protests in states such as West Bengal, Tamil Nadu and Karnataka have been more about the imposition of Hindi by the Narendra Modi government than against English.

Jagan’s decision was received with howls of protest by Vice President M. Venkaiah Naidu, Chandrababu Naidu and actor-turned-politician Pawan Kalyan. They said Telugu will wither away if it was just confined to a single subject from 1st to 10th standard in all schools. Jagan sarcastically asked them which medium of instruction their children and grandchildren studied in. One critic sneeringly said that Jagan should change his party’s name from YSR Congress to English Desam!

Jagan has also decided to curb the use of liquor in phases, so that Andhra Pradesh would be dry in 2023. Telugu Desam founder N.T. Rama Rao had introduced total prohibition at his swearing-in ceremony in 1995, but it was reversed, ironically by his son-in-law Chandrababu Naidu. Jagan says women, in tears, had told him that families were being destroyed because of the liquor policy.

Jagan has also cancelled mega contracts for construction of the Polavaram project and the new capital of Amaravati, for sand mining, and for land allotted to big industrial groups by the Telugu Desam government. A stack of notebooks—filled with public suggestions and Jagan’s speeches at village squares and on roadsides—is being scanned for fresh policy initiatives. His government has introduced a massive number of welfare schemes to provide womb-to-tomb social security for varied vote banks. However, the war over the medium of instruction is becoming hotter as questions of Telugu pride and identity are being raised. Just five years ago, Andhra Pradesh was divided into two Telugu-speaking states—Andhra Pradesh and Telangana.

Interestingly, if Jagan can persuade the people of Telangana that he would like to reverse the merger and rule the larger state, the state would be English with Telugu characteristics!