Military men are chosen neither for a sense of humour nor for tolerating insults. It is no surprise then that the Army top brass is peeved at those who were in uniform till recently. Annoyed by the strident criticism of retired officers, livid serving officers want pensioners to be bound by a code of conduct. The generals and brigadiers in the Army headquarters feel they have been ridiculed by verbal fusillades in the media over issues like withdrawal of income tax relief for disability pension. If they have their way, retirees will have to sign a bond agreeing to keep their lips sealed and their comments bottled up in their resentful bosoms.

More than the traditional media, the anger in the Army headquarters is directed at the use of social media by retired officials. It is true that retired people have a lot of opinions, free time and itchy fingers. The elderly in general are the ones who read almost every forwarded message and in turn forward it to others. The forwards are embellished, coloured and twisted to hit the targets more painfully. They go viral. The Army is worried that these viral posts could reach serving officers and men, disturbing them emotionally and mentally.

The population of greyed pensioners from the armed forces is estimated to be 24 lakh in India, with an addition of more than 50,000 every year. The present guidelines are aimed more at avoiding retired officers using sensitive information in the private sector. But the implementation is so half-hearted that a number of retirees are working for domestic and foreign arms companies, even acting as middlemen. Some officers have built liaising empires in the last half century. 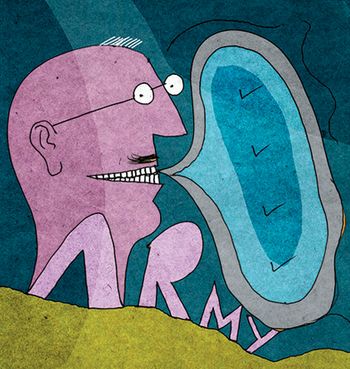 This is a problem that worries other ministries in the Central and state governments. There have been questions about a former chief vigilance commissioner joining the board of a large petroleum company without waiting to complete the two year cooling off period for joining the private sector. But it has been argued that company directorships cannot be considered as a regular job and hence there is no restriction. But too many officials from infrastructure ministries and public sector companies have joined the very private companies they were dealing with while in government service. Though the government has the power to stop pension to a retiree who violates rules, it is not readily implemented.

Outspoken veterans argue that they are only exercising their right to freedom of speech and expression, and that it cannot be gagged. Groups of retired bureaucrats regularly write open letters to the prime minister and other governmental dignitaries, voicing strong criticism against policies and statements. The government cannot ban such outbursts saying it affects the morale of serving bureaucrats or ministers. However, these dissenters lose opportunities in the lucrative market of getting nominated to boards, commissions and committees.

In a tweet storm, retired Army officers have used choice epithets including “idiotic” to describe the Army’s proposal for a verbal ban on pensioners. They have questioned the locus standi of the proposal and say it infringes on the freedom given by the Constitution. There is a sarcastic remark that a code of conduct is required more for the generals. Perhaps it may be wise for the Army to develop a thicker skin and ignore the carping. If there is a genuine grievance, it can be redressed. The Army can also use its own specialised wing for ideological warfare, located close to the Army chief’s office in Delhi’s South Block, to take on the grumblers. After all, it is a battle of nerves, exacerbated by heated words.