With Maharashtra and Haryana assembly elections out of the way, the BJP is getting ready to decide on the presidential succession. The appointment of J.P. Nadda as working president, soon after president Amit Shah became home minister this summer, indicated that Shah would complete his full term as president and Nadda would step into the big shoes. Unless there is a rethinking that Shah is inevitable at the helm of party, the transition will take place this winter, as Shah completes his term.

The replacement of Ram Lal, general secretary in-charge of organisation, with B.L. Santhosh was the biggest change in Shah’s team in the last five years. Otherwise, there were only incremental changes, and many ministers with organisational experience like Prakash Javadekar and Dharmendra Pradhan were entrusted with handling state elections, and negotiations with current and potential allies. Under Nadda, too, the ministerial pool will be extensively used for these functions. 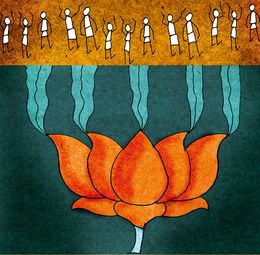 But it is yet to be seen whether he would bring in new office bearers, in consultation with Shah and Prime Minister Narendra Modi. This change in the organisational mix would come with an expansion of the council of ministers—there are two dozen ministerial openings. Some of the party officials who have impressed Shah with their work could get rewarded.

However, in terms of work allocation, Nadda may not be innovative. He will continue the usual duties—allotting work based on states, and specific voter groups like farmers, youth and women. It will be aimed at continuing the BJP as a formidable electoral machine. But the experience of the implementation of Modi’s flagship programmes shows that some of them have not clicked because there was more dependence on bureaucracy and publicity campaigns. The party functionaries who are in positions of power were not fully enthusiastic or were made accountable for their implementation.

The Swachh Bharat mission is an example. The prime minister launched an audacious programme to make cleanliness an essential part of Indian DNA. Yet, many cities remain dirty. Delhi, which has three BJP mayors, battles with pollution and garbage issues. Many big cities in north and west India have mayors and majority of councillors from NDA partners. Perhaps, a general secretary could be entrusted to deal with mayors and panchayat chiefs of the party in the country, assessing their strengths and weaknesses, and ensuring implementation of programmes.

Similarly, programmes like Mudra (micro loans to the poor) could have a general secretary to look at beneficiary issues and give a feedback.

During Lok Sabha elections, the RSS, which worked actively for the BJP’s return to power, entrusted its workers to visit households in north Indian states to do a survey on whether benefits like free gas connections, toilets, housing allotment and other benefits had reached them. The teams motivated the families saying that neighbouring villages had got the benefits, and that they would soon reach the families which were yet uncovered.