Big cities and small towns these days have a common story. It is about how millions of big, medium, small and tiny industries and businesses are coping with the economic slowdown, which began with demonetisation and now has hit a big trough. While there are reports of forced and unforced bankruptcies and job losses, the past five years have also shown the positive sides of employers and employees in enterprise after enterprise.

Faced with a slump in demand, indifferent GST bureaucracy in most states, fist-tightening by banks and disruptive impacts of policy and technology, MSMEs, which did not have deep pockets, have found deeper reservoirs of grit to carry on. For every closure of an enterprise, five others are soldiering on. From Punjab to Tamil Nadu to Gujarat to Bengal, there are many heartwarming tales. 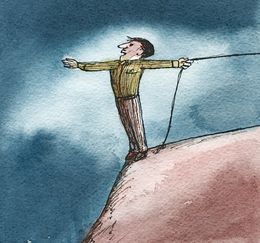 Reports from Belur industrial estate in Hubli in Karnataka, which has plenty of manufacturers of original equipment for automobiles, speak of how employers are trying to retain their workers. However, work has shrunk from three shifts to one, and there are no orders for every day of the month. Skilled workers are deployed to clean the streets of the industrial area. In one company, employees still come for night shift, but as the machines are silent, a preacher gives a discourse on the Bhagavad Gita to them. Salary and spiritualism go together as the karmic doctrine makes sense in times of loss and stress.

In many enterprises, salaries are compressed or delayed, but hope rides on a thread, preventing large layoffs, from ancillaries to service providers. But the stark reality of both capital and orders drying up and money locked up in government treasuries has only now wakened the government. Statements of economic advisers on advancing deadline for replacement of petrol/diesel vehicles with electrical vehicles are an example of irresponsible disruptions of both policy and technology. Experts say governments elected for five-year terms can take tough decisions only in the first two years, as the last three are to prepare for the next election. But the last two full budgets of Arun Jaitley and the latest one by Nirmala Sitharaman were tough ones.

Now the finance minister’s stimulus package has brought hope in Hubli and hundreds of mini industrial cities. The promised relief to medium and small industries from banks, non-banking financial companies and tax authorities, and the decision to buy cars for government have raised more cheers. Some element of clarity has come on the use of internal combustion engines in vehicles, after strong words from major automobile manufacturers.

Sitharaman has also promised to travel across the country to sensitise those whom she calls “tax authorities” to follow the law and end tax terrorism. As all public sector banks are under her control, it would be good to meet the bankers and motivate them to spur economic growth and retention of jobs. Then the lathes will hum and the Gita could be studied in spare time.