Precedents set by opponents unwittingly help political rivals. During his three-day visit to the United Arab Emirates and Bahrain, Prime Minister Narendra Modi will receive the Order of Zayed, the UAE’s highest civilian honour. There will be no controversy about it because the Election Commission of India had ruled 13 years ago that an Indian holding an office of profit can receive honours from a foreign government as long as they do not declare allegiance to that country. Interestingly, the complaint then was against Congress president Sonia Gandhi, who was holding an office of profit—cabinet rank as chairman of the National Advisory Council.

A bitterly divided election commission had ruled that Belgium naming Sonia a Grand Officer of the Order of Leopold did not violate the prohibition on accepting titles from foreign states under Article 18 of the Constitution. While the chief election commissioner said Sonia had violated her oath as MP, his two colleagues said that was not the case as the Belgium government had clarified the award was honorary. After the commission’s decision, the BJP said it was a “dead issue”. 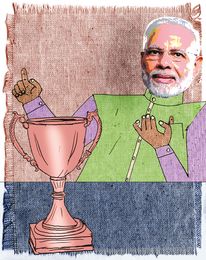 Article 18 was a nationalistic revolt against the British colonial practice of giving knighthoods and honorary titles to Indian subjects in recognition of allegiance and services to the British empire. (Around 200 people, including maharajas, their dewans, industrialists and zamindars received grand titles.) Furthermore, the Indian government was barred from giving titles to the citizens, except for educational and military achievements. Five years after the Constitution was adopted, prime minister Jawaharlal Nehru broke the ban by instituting the Bharat Ratna and Padma awards, and was even awarded the Bharat Ratna the next year.

Prime minister Morarji Desai discontinued the awards in 1977, based on the opinion of attorney general S.V. Gupte. The honours were brought back by prime minister Indira Gandhi four years later, but the irony was that Desai later accepted not only the Bharat Ratna, but also the Nishan-e-Pakistan, the western neighbour’s highest civilian honour. Desai was criticised for accepting a title from Pakistan. This made the prime minister’s office and the external affairs ministry more careful about such awards. As a result, countries like Pakistan, China, the United Kingdom and Portugal (former colonisers) were blacklisted. Every award offer, even for Union ministers and chief ministers, is scrutinised; the opinion of Indian ambassadors and the Research and Analysis Wing is also considered. Even honorary doctorates offered by foreign universities are scrutinised.

Modi is being wooed by big foreign governments with their awards. He was trolled for accepting the first Philip Kotler Presidential Leadership Award as Kotler is an author and professor, better known for teaching marketing. Thereafter, the PMO has ensured that the awards accepted are either from foreign governments or multilateral bodies like the United Nations. The prime minister’s award cabinet is already packed with honours like Russia’s Order of St Andrew the Apostle the First-Called, the $2,00,000 Seoul Peace Prize (Modi made the finance ministry reverse its decision to grant tax exemption), the Grand Collar of the State of Palestine, Afghanistan’s Amir Amanullah Khan Award, the UN’s Champions of the Earth (Policy Leadership), and Saudi Arabia’s King Abdulaziz Sash. The awards by foreign governments are the highest of those countries and are given to national leaders who foster business and strategic ties with them or, in case of the poorer countries, provide support. With a full second term ahead, Modi’s supporters are confident he will bag more awards, including the Nobel Peace Prize, for which nominations were sent by admirers!