The price of austerity

Imran Khan’s decision not to stay at a five-star hotel during his upcoming visit to Washington is in line with his austerity drive, which began last year when he shunned the prime ministerial palace in Islamabad and moved to a three-bedroom house. Imran plans to stay at the official residence of Pakistan’s ambassador to the United States during the three-day visit, which will also see his first meeting with President Donald Trump. The Pakistan foreign office, however, is in a funk over the decision as the prime minister’s retinue is a large one. The US Secret Service, which handles the security liaison of visiting heads of state and government, and the local administration prefers Imran to stay in a five-star hotel with its facilities, and, more importantly, multiple entry and exit points.

The last Indian prime minister who preferred such austerity was V.P. Singh, who led the country for less than a year. Before an official visit to the Soviet Union, Singh, who had come from an aristocratic family but embraced socialist values, expressed his desire to stay with the Indian ambassador in Moscow. The external affairs ministry was not in favour as the accommodation was not big enough. A solution emerged when Soviet president Mikhail Gorbachev invited Singh to stay in a grand apartment in the Kremlin, the seat of government in Moscow. 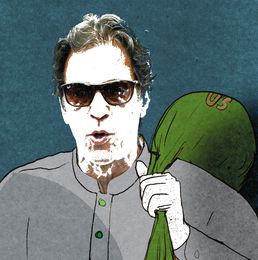 Later, the MEA, the prime minister’s office and security agencies worked into the blue book (the super secret book of instructions on security and protocol requirements for the president, vice president and the prime minister) that VVIPs would stay in larger and secure places, which also meant luxury. The economic reforms under prime minister P.V. Narasimha Rao and the improving foreign exchange reserves helped avoid any pangs of conscience. The multi-ministry advance party which goes to foreign capitals to prepare for the VVIP visits ensures that entire floors of a big hotel are booked, with rooms for the family, key aides, servants, security agents, cooks and communication experts. Booking a suite in the range of Rs3 lakh to Rs5 lakh a night for the president and the prime minister has become common practice. The MEA say India has enough economic power to decline hospitality offered by foreign governments, howsoever friendly they are.

When president Barack Obama invited prime minister Manmohan Singh to be his administration’s first state guest, the White House offered to put up Singh and his wife at Blair House next door, which is meant for visiting dignitaries. The PMO was tempted by the offer, but the Indian embassy pointed out that the stay and expenses were monitored by the US congress and the media, the prime minister could stay for only two days and that only a limited number of rooms would be available. India politely declined and booked Singh into a big hotel near the White House. The tradition of independent accommodation has also continued for Narendra Modi, who prefers vegetarian meals prepared by his cook and has no accompanying family members.

Interestingly, Indian officials who have handled protocol issues regarding prime ministerial visits say Imran will not be able to save much as extensive work will have to be done in the ambassador’s residence for a three-night prime ministerial stay because of security, communication and protocol needs. Moreover, halls need to be hired if he chooses to receive large delegations like members of the Pakistani diaspora. But his image will get a boost for having shunned luxury at a time of economic distress.