Some chief ministerial chairs get rattled during Lok Sabha elections, even though the issues and personalities are national. Even in this election, some of the state chieftains are keeping fingers crossed about the outcome. Mass dismissals of state governments by a new prime minister are a thing of the past. But there are other uncertainties.

An anti-incumbency vote against the Congress in the post-Emergency election of 1977 swept the Janata Party to power at the Centre. Prime minister Morarji Desai and his cabinet, egged on by home minister Charan Singh, said nine Congress governments in the states would have to be dismissed. The acting president B.D. Jatti resisted but the cabinet did not relent. Out went the chief ministers, and the Congress lost the state polls. But in two years, the Congress returned to power at the Centre and sacked the Janata governments, except in Haryana where Janata chief minister Bhajan Lal crossed over to the Congress with his MLAs. 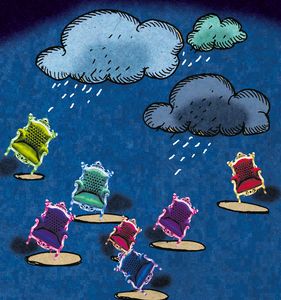 In this election, the chair of H.D. Kumaraswamy is shaking as there is a war of words between the Congress and Janata Dal (Secular), which are in coalition. Serious loss in south Karnataka, especially the defeat of JD(S) supremo H.D. Deve Gowda or his two grandsons, can bring down the government. The BJP has failed in two toppling operations, but a big victory in the state would embolden a big strike against demoralised and squabbling allies.

If Narendra Modi returns to power with a large majority, one target will be Mamata Banerjee’s throne in Kolkata. While campaigning, he said 40 Trinamool Congress MLAs were in touch, infuriating Mamata at the outright declaration of toppling intentions. Similarly, the saffron party could dislodge the new Congress governments of Kamal Nath (Madhya Pradesh) and Ashok Gehlot (Rajasthan) if the Congress performs badly in the two states. Both governments have thin majorities.

While simultaneous assembly elections have given the power to voters to decide the fates of chief ministers of Andhra Pradesh (Chandrababu Naidu), Odisha (Naveen Patnaik), Sikkim (Pawan Chamling) and Arunachal Pradesh (Pema Khandu), it is a peculiar combination in Tamil Nadu. The results of 22 assembly byelections, which will be announced along with the outcome of 38 Lok Sabha constituencies, can save or finish Chief Minister E. Palaniswami, who is surviving because the speaker disqualified 21 dissidents last year. That is why Palaniswami has focused his party’s energies and resources more on the byelections.

Another strongman who could be in trouble due to abysmal results is Yogi Adityanath, who has a commanding majority in the state assembly. But if the BJP tally drops badly in the state following a successful vote transfer between the SP and BSP, then knives will be out against the religious leader-turned-chief minister.

The Lok Sabha results also would be a pointer to which way the political wind is blowing for four chief ministers whose states are due for elections within a year—Devendra Fadnavis (Maharashtra), Manohar Lal Khattar (Haryana), Raghubar Das (Jharkhand) and Arvind Kejriwal (Delhi). Pre-result tension is not confined to Delhi’s corridors of power.