In the past six months, Narendra Modi has stopped emphasising on some of his pet ideas and has been more accommodative of the wishes within the BJP and the extended sangh parivar. On economic policies, he accepted the intense pressure on the need to relax GST rates as they are pinching the trader class, once the key support base of the Bharatiya Jana Sangh. Similarly, he imposed tougher rules against e-commerce giants like Amazon and Flipkart, as the ordinary retailers said they were being pushed out of business by the aggressive bigger players.

His government also galvanised the Ayodhya case in the Supreme Court, after not showing any haste for the first four years. This met the key demand of the Vishva Hindu Parishad as well as the Rashtriya Swayamsevak Sangh. 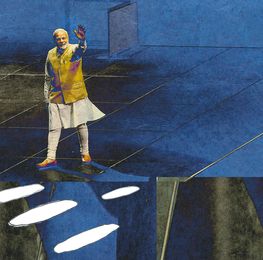 He has also realised that welfarism is as important as development. If demonetisation was meant to bring more people and incomes under the tax base, the big concessions to taxpayers has taken more people out of the income tax net than ever.

Another significant piece on nonaggression has been on his pet theme of simultaneous elections for Parliament and state assemblies. The BJP strongman had been advocating the concept, earlier strongly pitched by BJP stalwart Bhairon Singh Shekhawat, who was vice president of India and chief minister of Rajasthan. Modi had strongly argued for a political consensus, but barring a few regional parties like the Biju Janata Dal and the Telangana Rashtra Samithi, there were no takers for the idea among political parties.

But there was an expectation that Modi would make the state elections in Maharashtra, Haryana and Jharkhand—slated for later in 2019—coincide with those in Odisha, Andhra Pradesh, Sikkim and Arunachal Pradesh, which are scheduled to go for simultaneous elections. There were even suggestions that Modi could have brought Rajasthan, Madhya Pradesh and Chhattisgarh, which voted last December, under president’s rule for six months, so that they could have simultaneous elections. But, the BJP leadership did not have consensus for such a far-reaching proposal.

The defeats in these three states has also meant that chief ministers Devendra Fadnavis (Maharashtra), Manohar Lal Khattar (Haryana) and Raghubar Das (Jharkhand) were less than keen on simultaneous polls. Those against the move also cited how it had backfired on S.M. Krishna of Karnataka in 2004. Interestingly, Telangana Chief Minister K. Chandrashekar Rao, who could have had simultaneous elections in the normal course, opted for early polling, as he did not want to get mangled in any national wave generated by the Lok Sabha elections. His instincts paid off as the TRS rode back to power impressively.

As the BJP is now in power in fewer states than a year ago, the idea of amending the Constitution to have simultaneous elections, as recommended by the Venkatachaliah Commission, which reviewed the Constitution, has become more difficult to attain. Such a provision would have meant no replacement of a prime minister or chief minister who loses majority unless the Parliament or assembly elected a successor, and there would be no byelections for vacancies caused by death and defections.

The BJP has gained a lot through Operation Lotus in Gujarat by luring Congress MLAs to resign from the assembly, as Modi and party president Amit Shah take revenge on the Congress for giving them a close fight in the 2017 assembly elections. The BJP is also trying to persuade more MLAs of the Congress and the Janata Dal (Secular) to jump ship in Karnataka. Thus, practical politics has trumped the ideal of simultaneous elections in more ways than one.