A startup is a young company founded by one or more entrepreneurs in order to develop a unique product or service and bring it to market. By its nature, a startup tends to be a shoestring operation, with initial funding from the founders or their families. It is a venture in search of enough financial backing to get off the ground. Its first challenge is to prove the validity of the concept to potential lenders and investors. In order to do that, they have to make a strong argument, if not a prototype, that supports their claim that their idea is truly new or better than anything else in the market.

The youth in India constitutes nearly 20 per cent of total population as per census 2011. The number is expected to rise to 30 per cent in the 2021 census. We need jobs, and startups create jobs. More than 1.87 lakh jobs have been reported by 16,105 startups recognised by the department for promotion of industry and internal trade. 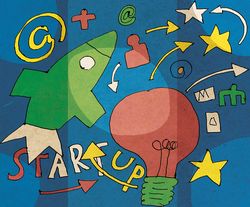 Great ideas attract investments from Indian as well as foreign investors. This brings more money in the market, and thus helps the economy. With the abolition of angel tax and the Securities and Exchange Board of India having classified angel funds separately, it is now possible for individuals to invest in units of angel funds. This opens up a significant opportunity for platforms and fund managers who want to manage angel funds and make the process easy for both investors and startups.

With new technology, startups tend to innovate better. Swiggy revolutionised our dining experience. Flipkart connected the urban and rural India with pan India delivery of goods. Ola and Uber changed the taxi system in India. AddressHealth is changing medical services. Paytm changed the billing and payment system. And, many more startups are coming up every day.

Governments are intrinsically created to cater to and work with established economy. Bodies like NASSCOM, FICCI and CII are making their voice heard in a structured manner. They understand each other’s style of working. The government realises what traditional economy requires and expects from it. In contrast, startups tend to disrupt traditional economy. New technologies are used to carve out new branches in old sectors and sometimes create whole new sectors. The internet has become the backbone of the app-based services throughout the country. Change is good, and often leads to development. But it comes with its own challenges—the difficulties of venturing into the unknown, both for the startups and the government.

Thankfully enough, India recognised this sector at a nascent stage and the hardships faced by the young and bright minds of the country. Startup India was an initiative that was launched in 2016. According to a report in Inc42, a media platform that covers Indian startups, between 2016 and 2019, as many as 15,113 startups were recognised under the Startup India programme across 492 districts in 29 states and six Union territories. Of these, 13,176 startups have reportedly created 1,48,897 jobs with an average of 11 employees per startup. Fifty-five per cent of the recognised startups are from tier-1 cities, 27 per cent from tier-2 cities, and 18 per cent from tier-3 cities. Forty-five per cent of the recognised startups have at least one or more women directors. The government made 22 regulatory amendments and approved 1,275 patent rebates in the last three years. Twenty-four Indian states have introduced a startup policy.

As the data above suggests, transparent, nimble and open handling of the “new sector economy”will help India achieve the $5 trillion economy faster.