The Sustainable Development Goals (SDGs) are a list of 17 key socioeconomic goals adopted by United Nations member states in 2015 as part of a joint effort to end poverty, protect the planet and ensure that all people enjoy peace and prosperity by 2030. SDGs replaced the Millennium Development Goals (MDGs), launched in 2000 by 189 countries. The USP of SDGs is that they are integrated in nature, and all goals are interconnected and inter-consequential.

The basic difference between MDGs and SDGs needs to be understood. MDGs focused on U5MR (under five years child mortality rate), HIV, widespread illiteracy and gender inequality. The aim was to bring down the statistics by at least half, and concentrate on extremely poor and underdeveloped pockets of the world. SDGs, on the other hand, focus on all 193 countries, and urges the world to bring extreme poverty, hunger, gender inequality, health concerns, and environmental concerns to an empirical zero. 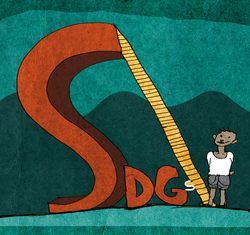 There is an interesting Indian tangent to the SDGs. The Atharva Veda has a hymn called Bhumi Sukta (63 verses) which says that earth is for all living beings and all have to work in harmony with nature to create ideal living conditions. It adds that the feeling of spirituality needs to be there. Until then, SDGs cannot be accomplished. Every small element contains infinite force within itself.

Where do we stand?

India, like other nations, has introduced major interventions to address these issues.

The government of India has undertaken many reforms in the country against the backdrop of SDGs, launching ambitious schemes such as the National Food Security Act, 2017, the National Nutrition Strategy and the National Nutrition Mission, which have the aim of promoting convergent approaches that reflect the multidimensional nature of food and nutrition insecurity, and addressing inequalities related to gender, age, disability, income, caste and region. This goal is closely linked with zero poverty, as decrease in poverty leads to increase in purchasing power of food, leading to an improvement of India’s rank in the hunger index.

SDG’s Goal 8 is to ensure decent work and economic growth for all. To achieve this, India has launched programmes like Make in India, Startup India, Skill India and Digital India.

To accelerate the efforts to achieve universal sanitation coverage, the prime minister launched the Swachh Bharat Abhiyan on October 2, 2014, which has been a huge success throughout the country.

The Union government has crafted relevant policies, many of them innovative in nature, to ensure that all sectors work in an integrated manner to achieve the highly ambitious SDGs and to improve India’s international rankings.