Time for Mamata to shun sectarian ideology and politics of appeasement

I have been among those fortunate who got re-elected to the biggest panchayat of the nation. However, each one of us in politics knows well that winning an election is not easy. It requires winning the trust of the people you work for. Such trust eventually comes from performance, at the individual and collective levels. 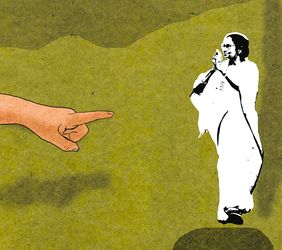 However, in order to perform in a meaningful way, you need to go back to the people, and understand their needs and find solutions. You need to engage with them and make them active participants in the process of development aimed at their own betterment. That is the basics of democracy and electoral politics. So, heading back again to the people in my constituency and to work for their various needs in this new innings gives me a sense of pleasure and fulfilment. It gives me a chance to renew the trust.

The best thing to emerge from the last election is that electoral victories in India can no longer happen on emotive or sectarian calls; people look to performance. Now, the people’s representatives will have to perform and prove themselves to get re-elected. This is the best thing to happen to democracy and this, certainly, is the biggest achievement of the Modi government. However, it seems the message is still not getting across to some politicians in India.

Mamata Banerjee is one such politician who seems to have completely missed the writing on the wall. She still believes in the old school of politics where sectarian ideologies, backed by organised violence, are the formulae to win elections. She has been doing that for years and, in the absence of a strong and effective opposition in West Bengal, has been winning successive elections. However, her brand of politics has developed visible cracks.

Mamata’s sectarian ideology and her politics of appeasement have left the civic administration of Bengal plagued with anarchy and lawlessness. The common man is suffering because of the organised loot and terror unleashed by the local syndicates—a euphemism for an organised system of extracting money from the local people by the Trinamool Congress goons, in exchange for facilitating various services to them. However, times had changed and Mamata could hardly realise this until the BJP had pulled the rug from under her feet by winning 18 Lok Sabha seats in Bengal.

In politics, you cease to grow if you fail to learn from your mistakes. A seasoned leader keeps his ear to the ground and adapts to the changing trends. But, Mamata seems to be stuck in the old rut. The various post-election incidents in Bengal, where violence and terror is being resorted to as a means to settle political scores, is reflective of her old mindset. The only means to survive and play a long innings in politics is—Sabka Saath, Sabka Vikas. However, Mamata seems to have overlooked this important lesson. She must punish the goons, no matter what religious belief they may hold, and provide safety and security to everyone in the state without discrimination. Terror must be substituted with performance. Else, the people of Bengal would give Mamata a befitting reply in the days to come.