Temple must be built at the site

The recent decision of the Supreme Court to refer the Ram Janmabhoomi-Babri Masjid case to mediation is a welcome decision. Finding an amicable solution to the nearly 150-year-old legal dispute would always be the best thing to have in the situation. However, taking into consideration the past efforts at mediation, one can hardly be optimistic of finding a solution through the route of consensus.

As we know, the Ayodhya dispute is about ownership of land on which a disputed structure, popularly called the Babri Masjid, stood till 1992, when the same was demolished by the kar sevaks, who believed that the structure was erected over a temple that marked the birthplace of Lord Rama. The Muslims dispute the existence of any temple at the site predating the mosque and oppose any move to construct a temple at the land. 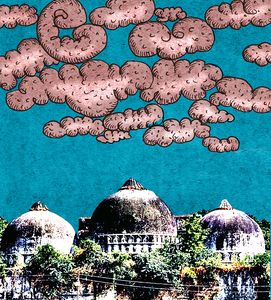 The first reference to a temple having been demolished and erection of a mosque at its place was made by Francis Buchanan, a surveyor under the British East India company, who claimed to have discovered an inscription on the mosque walls in 1814 that said that Mir Baqi, a general of Babar, had erected the mosque after destroying a temple, as per the order of his master. The fact was also repeated and recorded in the Faizabad District Gazetteer in 1870. Later, when Raja Sawai Jai Singh (of Jaipur) bought the land of the mosque and area around it in 1717, as a part of his effort to establish pilgrim centres in seven pilgrim cities of north India, his records mentioned the existence of a three-domed structure like a mosque, although the same was marked to be Janmasthan (birthplace), worshipped by Hindu devotees. Later, the records of a Jesuit priest, Joseph Tieffenthaler, had also corroborated the existence of the Janmasthan on the premises, circumambulated and worshipped by Hindus.

As a build-up to this view and following a long movement, the Naga warriors of Nirmohi Akhara, one of the prominent Vaishnavite monastic orders, had led an armed attack over the mosque in 1853 and claimed possession of it. However, the British government thwarted their attempts leading to a division of the site into two sections for both the communities. An attempt was made in 1853 to construct a Janmasthan temple, but after denial of the permission by the British government, lawsuits were filed. However, the lower court and later, the higher court, ruled to maintain the status quo. Later, following surreptitious placement of idols of Ramlala inside the mosque in 1949, the Jawaharlal Nehru government got the premises locked. However, Rajiv Gandhi ordered the locks to be opened in 1986 and allowed all Hindus to visit the place.

The various litigations that had followed after 1949 led to the decision of the Allahabad High Court in 2010 to divide the disputed 2.77 acres equally between the three main claimants: Hindu Mahasabha, Sunni Waqf Board and Nirmohi Akhara. The apex court is to hear the review of this judgment.

Nothing complicated the Ayodhya issue more than the collective cacophony of the Marxist historians who started muddling the scenario in the 1980s and 1990s when they lobbied weird theories, ranging from declaring Ayodhya to be an imaginary place to establishing Rama as a Mesopotamian king, and even an Egyptian pharaoh. Historians Romila Thapar and Vinay Lal declared Ayodhya as an imaginary place whose first existence was as a Buddhist inhabitation called Saket.

The centrepiece of the Ayodhya debate is the faith of Hindus that Ramlala was born at the site, and hence a temple must be built at the same site. Due to its strong cultural and religious legacies, Ayodhya enjoys a predominant Hindu atmosphere, which must be preserved. Hence, the process of mediation must take the above two factors into consideration without which no meaningful solution can be reached.

Lekhi is a member of Parliament • forthwriteml@gmail.com