The recent incident in Kolkata, where the chief minister of the state, Mamata Banerjee, sat on a dharna to protect the police commissioner was an unfortunate development for Indian democracy. It was an act of unprecedented brazenness, where a person holding a high constitutional position not only defied the law but also made a sinister attempt to politicise the executive and to make it an arm of the ruling dispensation.

The charges of the CBI against Kolkata Police Commissioner Rajeev Kumar pertain to the Rs2,500 crore Saradha chit fund scam—a failed collective investment scheme run by a consortium of more than 200 companies, collectively called the Saradha Group. It was being investigated by the special investigation team of the Kolkata Police, headed by Kumar. 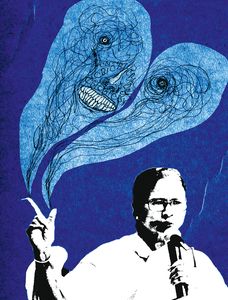 According to the CBI, Kumar not only withheld vital piece of evidences seized from the accused persons but also tampered with documents with the apparent intention to dilute the case and to save some powerful people close to the chief minister.

Let us understand why scams like Saradha and Rose Valley are different from regular scams. These groups, along with hundreds of other ponzi schemes that have failed over the past decades, would not have prospered without the active support of local politicians. It is well on record how the Trinamool Congress MPs, ministers and other functionaries promoted the Saradha Group and benefitted from it. Sudipta Sen, the head of the Saradha Group, had once brought a painting by Mamata at an astronomical price of Rs1.8 crore. In exchange, Mamata instructed all public libraries of Bengal to buy newspapers and publications from the Saradha Group.

The Saradha Group, as per the SIT, had collected Rs2,459.59 crore from nearly 17.4 lakh poor and lower middle class investors promising handsome returns. However, due to their unsound business model, undue political interference and immoral practices, the group collapsed in 2013, sending shock waves among lakhs of investors across West Bengal, Assam, Tripura and Odisha.

One reason of the collapse had been the bizarre investments of the group, where, under political pressure, it was forced to invest into heavily indebted and loss-making companies, apart from making unwise investments in print media and television groups.

In his 17-page confessional letter to the CBI in April 2013, Sen revealed that he had paid large amounts to TMC leaders, who used to arm-twist him for financial favours. No wonder Mamata resisted tooth and nail any suggestion of a CBI enquiry in 2013. Instead, she constituted a SIT under the Kolkata Police to cover up the case. It was only after the intervention of the Supreme Court in April 2014 that the case was handed over to the CBI.

As the long arm of the law has begun to catch up, Mamata has grown anxious as, on the eve of elections, she cannot afford murky skeletons to tumble out from her unholy cupboards. Mamata has made corruption a war cry around which she managed to draw none but a motley of corrupt leaders, who are already under high khauf (fear) of a determined chowkidar.

Mamata’s histrionics will prove to be a political misadventure as the nation has changed. India of 2019 is a nation that believes in probity, transparency, objectivity and propriety, and people will not allow anyone to cock a snook at constitutionalism and legal morality with such impunity. The corrupt must be brought to book through a fair trial—this is the war cry of the people of a new India.