An abusive man is not necessarily angry; he is just scared by your abilities, which he wants demeaned. Greater your abilities, sharper the abuses you will be subjected to. Nowhere else is the truth more glaring than in politics.

Of late, politics of abuses and profanities have become the norm with the opposition, particularly, the Congress. It is a new political culture promoted by a few leaders who use verbal abuses as a means of political mobilisation aimed at winning elections. That is why, as and when the election season arrives, the gaali culture takes the centerstage in political campaigning. This election season is not an exception. 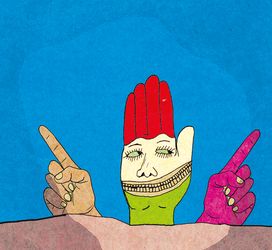 Prime Minister Narendra Modi has long been an object of verbal abuse by Congress leaders, who have used the whole gamut of profanities against him, ranging from ‘neech kisam ka aadmi’ to Hitler to ‘maut ka saudagar’. Congress president Rahul Gandhi himself got abusive as he called the PM a thief with the slogan—‘desh ka chowkidar chor hai’. Hitler, Ravan and Mussolini are just a few other epithets that have already been showered on him. Recently, Shashi Tharoor, a prominent member of the party, compared Modi with a scorpion sitting on a shivlinga with the vicious insinuation of hitting him with a chappal. The list is long and disturbing.

The Congress culture of abuses did not stop here, as their leaders went to the extent of dragging the family members of Modi into political mud-slinging. It is an act as unethical as it is reprehensible, as none of Modi’s family members is in politics. One Congress leader, typical to the culture of the Congress, has even questioned the lineage of Modi, implying that people with no illustrious lineage to boast have no right to occupy high positions. This is the archetypal Congress culture that cocks a snook at democracy and glorifies dynastic politics.

With each progressing day, the political discourse is touching a new low. A senior Congress leader from Rajasthan, C.P. Joshi, not only gave a bizarre statement on Brahmanism but also denounced Modi for talking on Hinduism. He suggested that only Brahmins are entitled to speak on Hinduism and, hence, leaders of implied low-birth, like Modi and Uma Bharti, are not qualified to talk on Hindu religion.

Getting abusive is a form of retribution by a person, failed in his or her attempt to better someone else through legitimate social and ethical means. Abuse is about entitlement, not abilities. A person feels aggrieved if he is not able to get something he feels entitled to and abuses those who he feels have usurped his or her entitlement. The gaali-culture in politics is borne out of a sense of deprivation where some leaders feel that they are entitled to rule the nation but have been deprived of it by others. As a result, they take recourse to profanities to get the better of their own frustration.

However, people are not fools. They respond to such filth judiciously. Each time the opposition took recourse to verbal abuse against Modi, the masses responded with ballots, returning him to power with bigger strength. Thus, the sooner the opposition gets back to the discourse of development and performance, the better it is for them. The lesson in politics is loud and clear—performance wins votes, not profanities.