After 13 months of incarceration, Dr Farooq Abdullah, MP and several times chief minister of Jammu and Kashmir, awaited his opportunity to speak in Parliament. The speaker had promised to give him time. In the event, he was allowed a minute at the start of the session and another minute at the end of it. This is what has happened to our parliamentary democracy.

Compelled, therefore, to tell Karan Thapar in an interview what he had wanted to tell the nation on the floor of the house, Farooq said the “trust” on which the “unity of the Muslim-majority state with India” was based has been broken, the “emotional bond” has “completely gone”, and “they [Kashmiris] do not feel Indian” anymore because “they are sick of what they are having to put up with. Every street has a soldier with an AK-47, a policeman; every street, every village”, their “dreams are gone, their children do not know their future” and “if I speak of India anywhere, they do not want to listen”. Kashmir had joined “Gandhi’s India, not Modi’s India”. “What is this? Is this democratic India? Is it Gandhi’s India?”

Asked why then there have been no protests, Farooq replied, “How can you have protests when every street is full of soldiers?” And, he then added ominously, “The minute you remove those soldiers, lakhs will be on the streets… You can keep the entire Indian Army there, but one day the volcano will blow.” India, he said, still holds “the land, with force, but they have lost the people.” The fight would not end until the abrogated articles, decreed “‘permanent’ by the Supreme Court”, are reinstituted; the division of the state rescinded; the “honour” and “dignity” of the people restored. 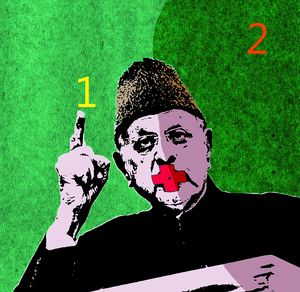 Thapar reminded Farooq that when all this happened in August last year, Kashmiris had taunted Farooq with cries of “Ab bolo ‘Bharat Mata ki Jai’”. Farooq admitted this was true “because we stood with India”, adding, “many of them felt, ‘Well good! They deserve it’”. But now, the Gupkar Declarations of August 2019 and 2020 have “brought all the parties together”. They realise, “divided we cannot win our battle…. Every party is putting their personal differences aside for the greater cause of the dignity of the people.” While no one wants to be a Pakistani, the present thralldom is driving all the regions—Jammu, the Kashmir valley and Ladakh—into the embrace of the Chinese, notwithstanding their treatment of Chinese Uighur Muslims.

There could have been a reasoned rebuttal because Parliament is all about the cut and thrust of argument. I remember my first visit to Parliament in 1960 as an 18-year old college student to watch Comrade S.A. Dange light into Prime Minister Jawaharlal Nehru for over an hour for dismissing one of the first democratically elected communist governments in world history—the E.M.S. Namboodiripad government in Kerala—while an impassive Nehru sat alert throughout the denunciation and there was no interruption from the Congress benches. Then, in the middle of the Chinese invasion of October-November 1962, Nehru arranged for both houses to reconvene to debate and denounce the failures of his foreign policy. That was democracy then.

Now, we have a prime minister running scared of listening to the truth about what he and his home minister have wreaked in Jammu and Kashmir. Instead, he ducks Parliament and treats himself to unchallenged monologues on our state media. That might have worked in Zia-ul-Haq’s Pakistan but is incompatible with the norms and practices of our 70-year old democracy.