Strive for a settlement

The India-China border in the western sector is neither defined, delimited or demarcated. This is principally because—as underlined by Nirupama Rao, former ambassador to China and former foreign secretary—in territorial disputes with its 15 neighbours, “China intentionally left its claims ambiguous”. She does not add, although I am sure she would agree, that this did not come in the way of China coming to a settlement with all of them, except India (and Bhutan).

We have put ourselves in a bind because ever since defence minister V.K. Krishna Menon flew to Geneva, in July 1962, to settle matters directly with Chinese foreign affairs minister, Chen Yi, Menon insisted that before talks begin “again”, China should “first demarcate several areas” to be given to India, and “commit” itself “in advance to letting India have these areas.” (Amit Baruah, The Hindu, June 16, quoting Marshall Chen Yi). This has dogged any settlement for the past six decades since China refuses to disclose its goals in advance of negotiations. It has done this with all other countries with whom it has had, but no longer has, border disputes. Can India not live with this asymmetry, provided it lights up the prospects of arriving at a settlement? 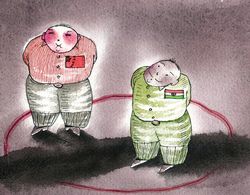 Prime Minster Narendra Modi confessed at the Tsinghua University: “Neither side knows where the LAC [Line of Actual Control] is in that area.” (Ananth Krishnan, The Hindu, June 16). Indeed, it was not till 1993, 41 years after the India-China war of 1962, that the 1993 India-China Agreement on the Maintenance of Peace and Tranquility became “the first legal agreement that recognised the LAC”. Yet, because the agreement did not define the LAC, it had “the unintended side effect of further incentivising the forward creep to the line by ‘both’ militaries” (Shivshankar Menon, Choices: Inside the Making of India’s Foreign Policy).

The 1996 agreement on Confidence Building Measures (CBMs) also did not include the exact location of LAC, although its general alignment was known to both sides, including the 13 hotspots (in all three sectors) which could lead to “face-offs”. Nevertheless, and notwithstanding the continued Chinese refusal to provide maps in advance of their “perceptions” of where the LAC lay, both sides took the wise step of agreeing at their special representatives talks in 2005 on the “Political Parameters and Guiding Principles for the Settlement of the India-China Border Question”. Readers are invited to underline for themselves the word “settlement”.

That should be the key objective. Nirupama Rao does not believe a mutual settlement is possible for “a generation or two.” But that pessimistic (if realistic) perspective could be sensibly shortened if we were to settle down to working out a “settlement of the border question”, instead of remaining fixated on non-settlement, despite having come to a mutual agreement, 15 years ago, on “political parameters” and “guiding principles” to “settle” the border question.

Why not get on with that instead of letting things lie until the Chinese provide us with maps that would reveal their hand in advance? We will get to know, in any case, as the talks move from stage to stage. And, we will have all the time in the world to make our claims known to them with no ambiguity, and then negotiate our way through the thicket. The alternative is to stick to Modi’s position that “India will protect every inch of its territory”—without even knowing where that last inch lies. Does it lie at the farthest reaches of Aksai Chin, as claimed by Home Minster Amit Shah, or at Galwan Valley and Pangong Tso in Ladakh?