Time was when a postcard from Srinagar meant a pretty picture of colourful shikaras on the Dal Lake or of tulips blooming in the spring and the leaves of the chinar turning golden in the autumn. The shikaras are still colourful but lie forlorn, parked along the quays while the sullen boatmen wait for the tourists who never come. The hotels are empty; the one we stayed in had only two customers, me and my colleague, O.P. Shah.

The smart shops along the boulevard were almost all shuttered. The one in front of our hotel—M.A. Ramazan & Co., “Carpets and Curios”—was open, but we never saw anyone enter or leave it. Only a few modest eateries and street vendors were in business, along with two or three Bihari boys eking out a bare living offering pedestrians channa and popcorn for a handful of coins. The loss of tourist income is estimated at Rs250 crore a day in Srinagar alone. And, yet, the Kashmiris have been told that Article 370 was removed to accelerate their income. 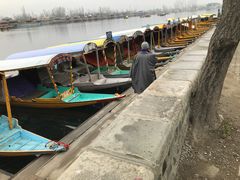 Photo taken by Aiyar during his recent Kashmir visit

I was pleasantly surprised at not being turned back at the airport itself. Perhaps, I said to myself, the prime minister really meant it when he invited the opposition to see for themselves the restoration of “normalcy” in the erstwhile state.

So, almost immediately after checking in, we went to meet Begum Khalida Shah, the 85-year-old daughter of Sheikh Abdullah, who carries memories of hosting Mahatma Gandhi. She gave us a copy of her open letter to the prime minister which contains a point-by-point rebuttal of the 23 claims made by the home minister justifying the abrogation of Articles 370 and 35A, without consulting the people or their elected representatives, as provided for in the Constitution. Unsurprisingly, she has not received a reply. We also learned of a novel form of detention invented to prove that “normalcy” reigns—prominent nationalist politicians and others are not formally served detention orders but are not permitted to leave their homes, and are not permitted to receive visitors without hindrance. The entire Sheikh Abdullah family is now holed up for the sin of having upheld the Indian flag for seven decades despite hundreds, perhaps thousands, of their workers falling to terrorists’ bullets.

The irony is that in order to make the Kashmiri “a full Indian”, the Kashmiri has been deprived of the rights and liberties to which he or she, as an Indian, is fully entitled. One only has to see the massive security deployment, with armed soldiers stationed on both sides of the road at distances of just 10m from each other, to see how the Kashmiri is being intimidated into loyalty to the Indian state.

Next day, we learned the true meaning of Home Minister Amit Shah’s declaration that anyone was free to visit Kashmir. The police reached our hotel to say the meeting we had convened could not be held as Section 144 was in force. In that case, we asked, how were groups of Kashmiris press-ganged into meeting the foreign envoys the day before? Moreover, our meeting was not in the open but “closed door”. So how could Section 144 apply there? No answer.

We were confined to our hotel. (I have heard of “house arrest”, but does the Code of Criminal Procedure provide for “hotel arrest”?). At the gates of the hotel, a police posse was posted with orders to not let anyone in or out. The following morning, we were permitted to drive to the airport—but under police escort to ensure that we did not stray. If this is “normalcy”, what, pray, is “abnormalcy”? As a former diplomat myself, I say any ambassador who claims to have found “normalcy” in Srinagar should never have been promoted beyond third secretary.