The quality of compassion, like “the quality of mercy”, as Portia told Shylock, “is not strained. It droppeth as the gentle rain from heaven... It blesseth him that gives and him that takes”. Accordingly, I whole-heartedly endorse the horror that Home Minister Amit Shah and the only Sikh minister in this government, Hardeep Singh Puri, have expressed at the murder of a young Pakistani Sikh out for wedding shopping in the busy bazaars of Peshawar on the very eve of his nuptials.

The assassins apparently got away but are being sought by the police. While the police think the murder may have its roots in a family feud, one cannot but agree that there is validity to the alternative interpretation being put on the incident by Shah-Puri that this reveals the parlous state of religious minorities in that country. Moreover, this comes in the immediate aftermath of the trouble at Kartarpur Sahib and the mob attack on Nankana Sahib, both in Pakistan. There is a need to remind the Pakistan government to do its duty to the minorities—both in the individual case of the young Sikh killed, and their indispensability to protect religious shrines of the minorities from desecration. 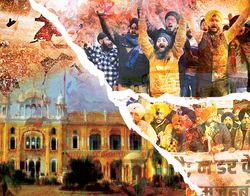 But, perhaps, our strong protests at these totally unjustifiable assaults on Pakistan’s religious minorities would have gained much in credibility if the Shah-Puri cohort had reacted equally fervently when scores of our own minorities were brutally lynched under the watch of this government. An innocent losing his life, whether to a bullet in a crowd or to mob violence, has to have equal value placed on it, whether that loss of life takes place in our country or another. Worse, when over a thousand Indian Muslims (at least) are massacred while the state government looks the other way, as happened in Gujarat, in 2002, or of innocent Sikhs in 1984, there is as much reason to be angered as when one Sikh in a foreign land is assassinated.

Indeed, Sikhs have been the target of lunatic attacks in the United States, Canada, Australia and the United Kingdom, among several other countries. Does our government deplore the failure of their host governments to ensure the personal security of these Sikhs (and other murdered Indians, resident or NRI, of different faiths) in lands with whom we have friendly relations? If so, surely the provisions of the Citizenship (Amendment) Act should extend as much to minority refugees “fleeing religious persecution” from these supposedly Christian countries as to the three indicted Islamic states—Pakistan, Bangladesh and Afghanistan.

So also with religious shrines sacred to the minorities. At least Nankana Sahib and Kartarpur Sahib have not been razed to the ground, while the rubble of what was once the Babri Masjid is at the same time being carted off by pious Sunnis to a site where these remains will be treated with honour. If we insist that the incarceration of the Muslim population of the Kashmir valley is an “internal matter”, then we need not expect any sympathy from the world when Pakistan says their treatment of minorities in their country is their “internal matter”. Which also explains the scepticism with which the BJP’s claim that CAA is not “discriminatory” is being treated abroad.

“As you sow, so shall you reap”. Would someone please send Shah a Gujarati translation of that biblical injunction in return for his kind offer to send the Congress president an Italian translation of the CAA?