No Kashmir without Kashmiris

The worst has happened. Jammu and Kashmir as a historical entity and a composite riyasat (kingdom) is no more. Through a dodgy legal sleight of hand, the very article that vests in the president the right to strengthen the special status of J&K has been used to extinguish that status. Now Article 370 has ceased to exist. Indeed, J&K as a state has ceased to exist. All this will be challenged in the Supreme Court and its verdict on the sustainability of the 2019 presidential order will prevail. But whatever the judicial outcome, our solemn pledge as a nation to give J&K a special status within the Union stands betrayed.

The special status of the riyasat was written into the demographic composition of the state. The Dogra Hindu community, to which the royal family belonged, was a minority in population terms, yet, along with Kashmiri Pandits, was the hegemon during the maharaja’s rule. The Buddhist community, small and confined to Ladakh, was overwhelmingly in a majority in the largest surface area of the riyasat. But it is the Muslims who constituted and continue to constitute the single most numerous community in the state. 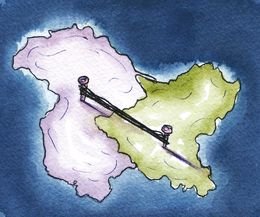 This cocktail of communities has made for the uniquely composite identity of the state known as “Kashmiriyat”. This identity ran afoul of Jinnah’s two-nation theory. The ideological clash between Jinnah and Sheikh Abdullah came to the fore when Jinnah visited Kashmir in 1944. Whereas Jinnah claimed that “99 per cent” of Kashmiri Muslims who met him considered the anti-Sheikh, pro-Pakistan “Muslim Conference alone” to be representative of Kashmir’s Muslims, the National Conference (NC) hit back in a statement that “we certainly owe no apologies to Mr Jinnah for our existence”. The statement ended with the punch line that since Jinnah’s “conception of Islamic sovereignty conveniently ends at the customs barrier that divides our state from British India”, the riyasat should be taken towards a “New Kashmir” rather than look to Pakistan. The NC’s leaders included a galaxy of non-Muslims such as Prem Nath Bazaz and Sardar Budh Singh. The “Naya Kashmir” manifesto sought to “represent all the people of the state” and eschewed “matters of Islamic theology”.

It is this civilisational political heritage that saved J&K for India. In keeping with this singular instance of a Muslim-majority state opting for Hindu-majority India in the midst of the tortured days of partition, we gave our plighted troth that the riyasat’s unique identity would be protected through a string of commitments that are like beaded pearls—the Instrument of Accession; Article 370, which guaranteed state autonomy by restricting the ambit of Union legislation unless and until accepted by the state assembly; the 1952 Sheikh-Nehru Delhi agreement assuring the state government has full powers to determine who would be given the status of permanent residents, given constitutional effect in 1954 through the presidential order annexing Article 35A to the Constitution.

In commending the accession to India as an integral unit of the Union, Sheikh Abdullah, in his inaugural address of 1951 to the J&K constituent assembly, referred to the apprehension that India might “in future convert into a religious state wherein the interests of Muslims will be jeopardised”.

That day has, alas, arrived. The only hope that lingers is Sheikh Abdullah’s assessment that “the presence of Kashmir in the Union of India has been the major factor in stabilising relations between Hindus and Muslims”. It is this “stabilising” factor that is being recklessly thrown away by further alienating Kashmiris from the nation. We cannot have Kashmir without Kashmiris.