Marine Le Pen is sort of a Madame Butterfly of French politics. Four years ago, when the far-right leader contested the presidential elections, it was unrequited love. Voters rejected her roundly. So, she rebranded, rebuilt and rejuvenated her Rassemblement National Party. Now it is roaring, threatening to oust President Emmanuel Macron in next year’s presidential ballot. Le Pen asserts: “There is no more split between left and right; there is a split between the globalists and the nationalists.”

Blurring traditional party loyalties give wind to Le Pen’s wings. If she wins, she would be the first far-right leader since World War II to become president of “Socialist” France, a momentous event for the European Union’s second-largest economy and as consequential as Brexit for the bloc.

Liberal France abhors the far-right’s populism and nationalism. But taboos are crumbling. Macron and Le Pen are neck and neck in current opinion polls, with Macron at 26 per cent and Le Pen at 25 per cent. Unlike her rabble-rousing, anti-Semitic father, Jean-Marie Le Pen, she unifies voters by adopting popular Brexit-type grievances, including hostility to globalisation, immigrants, free trade and the EU. Says French political scientist Chloé Morin: “Lots of ingredients are the same (as Brexit)—a rejection of elites, feelings of injustice, the desire to ‘take control’ of your country’s destiny.”

But Le Pen, who championed “Frexit”, has now withdrawn her threat to leave the EU. Dragging her party towards the centre has made her less untouchable to the public. Frustration with the sclerotic French bureaucracy is an old epidemic. This anger catapulted the insurgent newcomer Macron to power in 2017. As he now jockeys for his re-election, “reformation” remains Macron’s magic mantra. 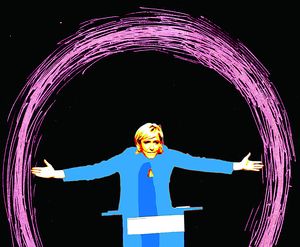 But after one term in office, the magic has gone and the mantra rings hollow. Macron broadcasts he is a “breath of fresh air”. Le Pen retorts, “Macron is the last gasp of the old system.” His diplomatique grandeur of French internationalism, peace-making and economic reforms fizzled along the way. Terrorist attacks, street protests and pension reform rebellions roiled France.

The pandemic also bruised image-conscious Macron. It stalled his reforms. It sullied his reputation. Critics lampooned and lambasted the self-proclaimed “Jupiter” for his erratic handling of Covid-19. He disdained scientific advice, then flipflopped to impose stringent lockdowns to control a third wave of infections. “Mr Know-it-all gets it wrong, again” is a snide refrain.

Perhaps Macron’s personality is the fatal flaw. Morin describes Macron as “scornful, haughty and as divisive as Le Pen”. Political analyst Nicholas Dungan says Macron fails “to convince people he feels their pain”. In an election that follows a pandemic, that can be fatal. Former socialist economy minister Arnaud Montebourg says: “Macron is hated because he is arrogant. He is not the rampart but the one who will sweep Madame Le Pen to power.”

But it is not a done deal for Le Pen. She lacks administrative experience, was involved in a Russian donation scandal and performed poorly in TV debates. The pandemic exposed the mess populists created worldwide. “Still,” says Dungan, “Trump and Brexit have shown you get elected on feelings, not facts.”

The French typically choose a candidate they dislike to defeat the one they hate. So, who do they hate more? Last time, they voted Macron to keep out Le Pen. Is it vice-versa now? If Le Pen rises from the ashes, Madam Butterfly could well turn into Madame Phoenix.