They are becoming the western world’s most dangerous cult. With coded acronyms like WWG1WGA, 8kun and X22, QAnon is a platform of racist, anti-Semitic conspiracy theorists. Born in the US in the Trumpian era of 2017, QAnon is now spreading across Europe, especially in Germany’s neo-Nazi strongholds. German sociologist Matthias Quent describes them as “people who are quitting the mainstream, who are raging against the establishment”.

The pandemic accelerated QAnon’s growth in Germany with neo-Nazis, anti-vaxxers (vaccination) and others joining the protest against Covid-19 measures, especially masks. They stormed the parliament, a chilling reminder of the 1933 Reichstag (parliament) burning—part of Adolf Hitler’s violent campaign to incite voters ahead of German elections. Warns extremism researcher Julia Ebner, “QAnon is a potential threat to national security.”

German intelligence agencies and the FBI agree. Earlier this month, the US House of Representatives overwhelmingly condemned QAnon as a “sick cult”. QAnon’s conspiracy theories range from the ghoulish to the absurd. Devil-worshipping, mind-controlling elites brew anti-ageing elixirs from children’s blood. The coronavirus was manufactured in a Chinese lab with Barack Obama’s help. The Covid-19 vaccine will turn humans into cyborgs. Colluding to enslave the masses are George Soros, Bill Gates, Mark Zuckerberg, Hillary Clinton, Tom Hanks, the Rothschilds and the Rockefellers. 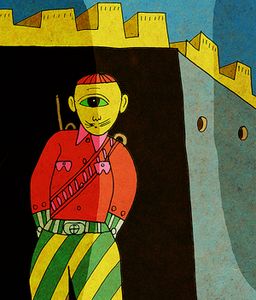 But there is a hero in QAnon’s worldview. “Trump is a saviour, a great redeemer for the German far right,” says extremism expert Miro Dittrich. QAnon believes Trump will save the world from the liberal cabal and is faking Covid-19 to deceive and destroy them in the coming Armageddon. They cheer Trump’s pandemic scepticism, nationalism and tolerance of white supremacists. They feel vindicated because his language and ideology legitimise theirs.

For QAnon disciples with impressive online viewership, this is lucrative business: bagging ad revenue, selling books and shady cures—quack creams, oils, pills and vitamins. Perhaps, it is good they make money. With their maniacal eyes and crazy ideas, their patterned shorts and cross medallions, rough beards and rougher mannerisms, they are unlikely to clear most job interviews.

But QAnon is crystallising into a political force. Thanks to Trump, who recognises QAnon supporters as a significant segment of his base, the movement appears to be on the cusp of going mainstream. For the November Congressional elections, 22 Republican candidates are QAnon fans, with Trump-backed Marjorie Greene expected to win in Georgia.

We know that WWG1WGA stands for “Where We Go One, We Go All”. Day X is the day Neo Nazis take over Germany. 8kun is an internet channel where violent anonymous posts vanish without a trace. But we still do not know who founded QAnon. Devotees believe QAnon‘s creator is either God or Trump.