Western pundits invariably reduce Russian President Vladimir Putin into a caricature. He is the brooding, power-obsessed, money-crazed, luxury-loving, paranoid megalomaniac. Putin’s recent constitutional changes reaffirm his domestic puppeteering prowess. In foreign affairs, he is the sinister strategist, the inscrutable grandmaster of global geopolitics, conniving, subverting, and plotting the downfall of the west.

Even American officials foster this image. Mike Rogers, the House Intelligence Committee chairman during Barack Obama presidency, famously said, “Putin is playing chess and we are playing marbles.” Westerners like to paint Putin as a Machiavellian manipulator who masterminds all the crises they face—Brexit, migrants, fake news, Donald Trump’s election and social polarisation. 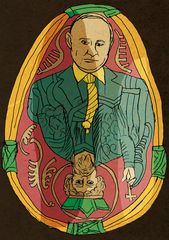 In a just-released book, Russia expert Mark Galeotti argues “the west gets him all wrong”. Putin, he says, is not a chess player. He is a judo expert, a nimble ninja who seizes the opportune moment to use his opponents’ strength against them.

Chess or judo, these are tactics. Putin’s success is his strategy, his vision of a strong, resurgent and respected Russia, risen from the Soviet Union’s ashes. His own name germinates this vision. “What’s in a name?” asked Shakespeare dismissively. For Putin, name is destiny. He sees himself as successor, not so much to Vladimir Lenin, but to Vladimir the Great, the expansionist prince-turned-saint who created the Russian proto-state 1,000 years ago.

Sword and stratagem, marriage and might, prince Vladimir used them all to conquer and annex neighbouring territories. A pagan, he shopped for the right organised religion for his people. To him, the loss of Jerusalem proved God had abandoned the Jews. Roman Catholicism permitted wine but prohibited polygamy. Islam, vice versa. He reportedly proclaimed—“No alcohol? Drinking is the joy of all Rus! We cannot exist without that pleasure.” In Constantinople, he found his answer. The Byzantine Church exuded the pomp and pageantry, rituals and riches that created “heaven on earth”. Thus the Russian Orthodox Church was born and prince Vladimir was anointed saint.

Veteran Russia-watcher Odd Gunnar Skagestad says Putin carefully and consistently crafts a persona that is in complete alignment with Vladimir the Great, both in terms of political power and in religious legitimacy. Putin believes the Russian Orthodox Church reflects Russia’s soul. Notwithstanding the communist purges of Christianity, church and clergymen, most Russians, especially women, are devout. Putin harnesses Russian pride and nationalism, faith and grandeur by invoking religious symbols and dignitaries.

Putin cannily cultivates his image. Strengthening the ex-KGB, Russian James Bond aura are pictures of the macho shirtless Putin, on horseback or hunting. Another video shows him emerging from freezing waters. More than fitness and endurance, it symbolises baptism. Exactly as in a painting by Viktor Vasnetsov depicting the baptism of Vladimir the Great, Putin rises from the wintry waters, golden cross gleaming on his torso.

Resurrection. James Bond’s favourite hobby. By deftly reincarnating himself as prime minister, Putin overcame constitutionally-mandated presidential two-term limitation and controlled Russia for two decades. Now, with his new constitutional amendments, Putin plots his post-2024 resurrection to perpetuate direct or indirect control for another decade. Putin often asks independent experts how history will view him. With the Russian economy sinking and social discontent rising, it is doubtful that he will be remembered as Putin the Great a thousand years from now.