My deal or no deal. Sounds familiar? Yes, we are back in Britain. The Shakespearean dilemma to leave or not to leave the European Union raises new proposals and threats that fizzle before they fly. When Prime Minister Boris Johnson unveiled his alternative proposal to continue the open border between Britain’s Northern Ireland and the EU member country of Ireland post Brexit, he challenged the EU: Take it or we leave without a deal. The ultimatum failed. The European Parliament’s Brexit coordinator Guy Verhofstadt said, “This is repackaging old bad ideas.”

Everyone agrees that border checks on the Irish frontier must be avoided lest it reignite the Protestant-Catholic sectarian violence. Johnson’s “flexible and creative” proposal conceptualises two borders, one on land, the other at sea. Electronic monitoring would make the Irish border checks invisible. Critics say it is not the checks, but the technology that is invisible—because it is not yet developed. Johnson’s proposal controversially mandates Northern Ireland’s legislature to periodically review and veto this agreement. The EU worships predictability. This clause convinced it that Johnson is playing to his domestic gallery, instead of crafting a stable, operational deal with the EU. 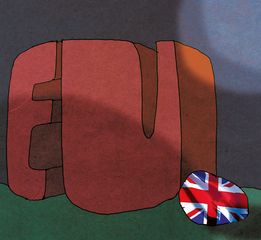 But Johnson’s proposal has more support than former prime minister Theresa May’s doomed deal, rejected thrice by parliament. It is liked by Northern Ireland’s Unionist Party and large sections within Johnson’s Conservative Party. At the annual Tory conference, his popularity was in full display. No one seemed to care about his alleged sex and sugar daddy scandals. Because of this Brexit crisis, “we are like a world class athlete with a pebble in our shoe,” Johnson said, entertaining party members with his jokes, punchlines and vivid metaphors. “Get Brexit done,” he asserted, to roaring approval. The fun and festive atmosphere, with much champagne and gin tonic flowing, was in contrast with the anger and infighting in the Labour Party’s conference.

A significant transformation is the consecration of the Conservative Party as a Brexit party. Much like how the Tea Party movement changed the Republican Party in the United States, the Leave.EU campaign infiltrated the Conservative Party to catalyse this change. This group has used the discredited data mining Cambridge Analytica’s techniques to target pro-Brexit individuals and create the biggest, most powerful online political engagement compared with any other party.

Leave.EU’s network fosters a culture of intimidation to ambush and silence prominent Tory ‘Remainers’—those who wish to remain in the EU. Conservative MP Philip Lee, one of those hounded out, has revealed the “destructive campaign” against him. Johnson’s trusted aide, Dominic Cummings, the architect of the Vote Leave campaign credited for winning the Brexit Referendum, is another prominent Brexiteer shaping the current government’s policies. The third leg of the Conservative Party’s hard right Brexiteerism is the European Research Group, whose celebrity member is Jacob Rees-Mogg, the lanky, languid aristocrat, who, like the other Brexiteers, blames the elites for betraying Britain’s glory.

But the glory’s gone and Britain is tired. Brexit is still undone and the current parliament exhausted. Fresh elections could lead to a Johnson victory. But unless he has a clear majority, the Brexit saga of confusion and uncertainty will drag on. But what happens on October 31, Britain’s deadline for a Halloween Brexit? The Brexit talks continue, but concluding a legally watertight deal requires more flexibility and time. The parliament has outlawed no-deal Brexit. But Johnson insists Britain will leave, come what may. Experts say another delay seems likely. Sounds familiar.