Brexit: The comedy of errors

Brexit unfolds like a Shakespearean drama. It also mirrors what Karl Marx said about history repeating itself, first as tragedy, then as farce. Brexit is delayed yet again because Britain cannot find the exit from the European Union.

As before, all exits turn into dead-ends because the British continue to brawl among themselves. Still, it wouldn’t be Shakespearean if there weren’t new twists to the tale. The delay necessitates Britain’s participation in the May elections to the European Parliament, a body they do not want to belong to, an idea Brexiters loathe. Opinion polls show that the faction-ridden, imploding, ruling Tory party will be mauled in the elections. 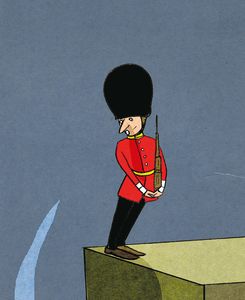 If Brexit stalls, some Tories vow to wreck the EU from within. Member of Parliament Mark Francois threatened the bloc, “You will be facing Perfidious Albion on speed.” Another Tory MP Jacob Rees-Mogg specified, “We could veto any increase in the budget, obstruct the putative EU army and block Mr. Macron’s integrationist schemes.”

French President Emmanuel Macron anticipates exactly such perfidious behaviour. He belongs to a proud tradition of French presidents, who prefer to keep “troublesome” Britain at bay. In the 1960s, president Charles de Gaulle blocked ‘Brexin’–Britain joining the European bloc. He believed the “nation of shopkeepers” did not share European continental values of strong states and social inclusion and would be America’s Trojan Horse. Reportedly, he said he would like to see Britain enter the bloc “stripped naked”. His denial was more devastating, “For a beautiful creature, nakedness was natural enough; for those around her, it was satisfying enough. But I have never said that about England.” In her 2002 book Statecraft, former British prime minister Margaret Thatcher—incidentally, the daughter of a shopkeeper—said de Gaulle “did not particularly like Britain, but he understood us quite well”.

So does Macron. To preempt potential sabotage, he insisted Britain leave by October 31, a day before the new European Commission takes charge. He emphasised, “We cannot weaken our institutions by having a member who is permanently there, but leaving.” He also succeeded in imposing a humiliating June review to check how wrangling Britain was progressing toward the Halloween Brexit.

Preferring to leave earlier to avoid the European elections, May tries desperately to forge a Brexit deal with opposition leader Jeremy Corbyn. But messy Brexit gets messier. May had offered her head on a platter if her rebellious MPs ratified her Brexit deal. They disdained the offer, wanting her head, but not her deal. Now they plot to topple her. Experts predict by year-end, Britain could be led either by the pro-Donald Trump, Tory Brexiter Boris Johnson or the pro-Vladimir Putin “Lefty” Labour leader, Corbyn.

For now, May remains prime minister, diminished in power, authority and support from her cabinet, parliament and her party. Satirist John Crace mocked that for Halloween, Theresa May would dress up as herself. “The living dead. If that did not terrify the EU into giving us another extension, nothing would,” he said.

In keeping with the history of repeats, yet another extension is possible, along with a second referendum, fresh elections, a soft, hard, Midsummer Night or Halloween Brexit. Or no Brexit at all. For Brexiters, that would be Love’s Labour’s Lost, for anti-Brexiters it is All’s Well That Ends Well. Britain’s fate is like the hit song Hotel California: “You can check out anytime you like, but you can never leave.” May cautioned, “The longer this takes, the greater the risk of the UK never leaving at all.” In which case, this three-year Brexit brouhaha would have been Much Ado About Nothing.