My Deal. No Deal. Delay. British Parliament sounds like a casino where all bets have gone wrong. Worse, uncertainty still rages—three years after the United Kingdom voted to leave the European Union.

Brexit is delayed by two weeks… but maybe not. No one knows what will happen, even at this eleventh hour. Is Britain leaving the EU or not? Will Britain leave with a deal or no deal? Will Britain exit on April 12, May 22, a year, two years from now, never?

This confusion, this constant “maybe, maybe not” refrain is British Prime Minister Theresa May’s mayhem. Officials describe her last meeting with the EU leaders as “90 minutes of nothing”. Britain teeters on the edge of a historic gamble, but May has no strategies, no answers. Her Plan B is to repeat Plan A. That is not consistency, that is reckless stubbornness. Accusing May of “unicorn hunting”, Labour MP Stella Creasy proclaims, “The definition of insanity is doing the same thing again and again and expecting different results.” 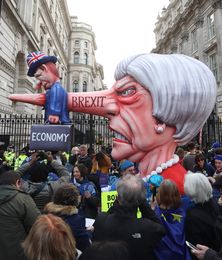 A protest in london calling for a second Eu Referendum/AFP

For a politician, May is awkward, lacking in judgment, people’s skills and emotional intelligence. She antagonises MPs when she needs them most. Her string of mistakes has turned into a noose: holding snap elections to improve Tory majority only to lose it, triggering EU divorce proceedings without a plan, imposing red lines that boxed her in and prioritising party unity over national consensus. Editorialised The Guardian, “The Prime Minister’s inflexibility and tactical ineptitude have just hit a new low, at the very time Britain faces a grave national emergency.”

May lobbed a grenade when she accused parliamentarians of “contemplating their navel”, playing “political games” and triggering a national crisis by rejecting her Brexit deal. Outraged MPs say May’s attack inflames public hatred against parliamentarians. Pro-Brexit hate-mongers call anti-Brexit MPs “traitors” who should be “beheaded”. Defence Minister Tobias Ellwood tweeted a menacing letter he received, vowing to “bring London to its f***ing knees”. Threats of intimidation, abuse and assault are so serious that Parliament’s Deputy Speaker Lindsay Hoyle urged MPs to go home together in groups or take taxis as “tensions and emotions are running at an all-time high”.

May’s emotions are also running high. She admitted she rebuked MPs out of frustration. Admirers who praised her steadfastness now say Britain “faces the most calamitous failure of government in modern times”. She is as unloved as her Brexit deal. Industry Minister Richard Harrington resigned, accusing May of losing control and “playing roulette with the lives and livelihoods” of Britons. Tweeted Tory MP George Freeman, “I am afraid it is all over for the PM. Across the country you can see the anger.”

While Britain’s political class flounders like a leaky barge battered by the Brexit storm, the EU runs a tight ship. Comprising 27 disparate countries and widely criticised for being big, blundering and bureaucratic, the EU has been remarkably united, nimble and patient, methodically plodding with negotiations despite “brexasperation” at British bickering. With its “flextension”, the EU aims to end this sorry saga of suspense. Great Britain’s ‘Great Gamble’ has left everyone “brexhausted”. Says Conservative MP Oliver Letwin, “I am past caring what the deal is.”

Brexit has taken a huge toll on Britain. Tory MP Dominic Grieve fears his nation could “spiral into oblivion”. The leadership collapse, the political breakdown, party infighting, parliamentary chaos, public polarisation, cabinet revolts, dysfunction and uncertainties have left the UK weak, divided, confused, tired and humiliated. Through history, Britain has been envied, admired, respected, resented or reviled. But never pitied. This, too, has come to pass.