Eyes don’t lie, nor do guts

Apparently, a lot. It turns out eye colour can determine if you are likely to get depressed in winter.

It is still cold in northern Europe, the landscape white with snow, trees sparkling with ice-crusted leaves. Breathtakingly beautiful when looking out from a heated room. Step outside and breath freezes. Even before their breath, the brains of Asians and Arabs congeal when winter descends. Anecdotally, they seem more blue than the blue-eyed locals. Now there is science to back this empirical observation.

New research suggests that people with dark eyes are more prone to the appropriately named Seasonal Affective Disorder (SAD), a type of depression triggered by diminished sunlight during the short winter days. A study by the United Kingdom’s University of Wales found that black eyes absorb more sunlight, just like black clothes do. As dark eyes are used to absorbing more light, they become more sunlight-deprived in winter, causing mood disorders. Blue eyes absorb less light anyway, so they are less affected. 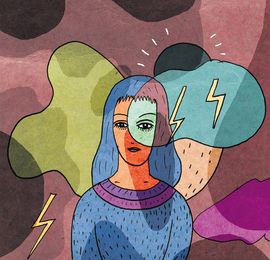 Colour is determined by the pigment called melanin. The more melanin, the darker the iris and skin, and greater the sunlight absorption. More melanin means slower metabolism of vitamin D obtained from sunlight. This is evolution’s shield—in the tropics, people are dark-skinned to ensure they don’t get excess vitamin D, while people in the cold north are fair-skinned so they absorb sufficient amounts. Melanin also produces melatonin, a hormone released in the brain that balances the circadian sleep-wake cycles. Produced in right quantities, melatonin helps people fall asleep, but in surplus, can make them lethargic or depressed.

Not surprisingly, SAD victims suffer disturbed sleep, weight gain, energy loss and a desire to withdraw socially. As with all research, there are caveats—not all people with dark eyes develop SAD while many blue-eyed people do. Eye colour is inherited, but SAD is not necessarily a genetic curse even though it predisposes some to depression symptoms. These can be countered by lifestyle choices—walking during lunch hour on sunny days help. Unfortunately, cold and listlessness induce SAD victims to huddle indoors, making matters worse.

Stomach microbes can also make matters worse. What’s bacteria got to do with it? Apparently, a lot. Researchers link depression, anxiety and autism to bacteria in the gut. Politicians obsess about the Axis of Evil, but scientists scrutinise the ‘gut-brain axis’. A recent study by Belgian scientists found that people suffering from depression lack certain species of gut bacteria.

Trillions of microorganisms swarm our stomach. The universe of microbiome or the community of beneficial and harmful gut microbes unique to every person is partly inherited from our mothers. Again, this is a genetic blessing or curse, but those deficient in good bacteria can compensate by eating fruits and vegetables. It is perhaps to generate healthy bacteria that traditional societies across the world include fermented food in their diets—sauerkraut, kimchi, curds.

Stomach bacteria affects both mind and body. Scientists draw correlations between unhealthy gut and type 2 diabetes, Crohn’s disease, ulcerative colitis, colon cancer, high blood pressure and heart disease. Eye, brain, body, stomach, they are all interconnected, exactly like the cosmos. New Age gurus say, “Don’t look up, look within.” Of course, they don’t mean look into your gut, even though we now know it is an abode of good health and fine qualities, ranging from intuition (gut instincts) to courage (guts).

Maybe there is more to navel gazing than we imagined.